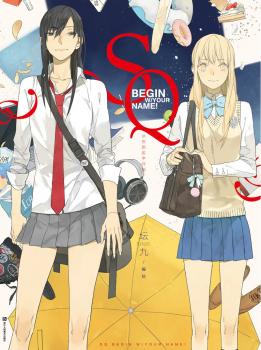 Sun Jing, a popular girl at her school has a crush on Qui Tong, who she sees at a bus stop but cannot talk to her. Despite being confident and coming off as a bit of a player and heart breaker, one smile from Qui Tong make Sun Jing redden and unable to speak. After a burst of confidence however, the two become friends.

We get to see short glimpses into their interactions, with some subplots and side characters. There are even holiday special strips, with one of them including a recipe! I really like when comics or books teach you things (I read a 4 volume manage called Stretch by Higashiyama Shou that has two female main characters that teach readers how to do stretching in everyday life! It’s a series that you never knew needed in your life)

The art is rather nice. It feels like a mix between simple and detailed and the colours are really warm. The plot starts almost immediately and we get to see scenes, then after a couple of chapters we get to see the actual backstory.

The interactions between Sun Jin and Qui Tong are super cute, sometimes awkward and very realistic. Sometimes we get to see the same scene from the two protagonists’ perspectives, which gives us more of an insight in their mind rather than the scene just being narrative.

Sun Jing is rowdy, has mostly male friends – her main best friend is Qi Fang who is also rather popular and tends to be ditched by Sun Jing and serves as her wingman- and is refreshingly honest. She does not over-think too much. She’s also a bit of a tomboy and rather funny.

Qui Tong is also popular but does not have that many friends. She misunderstands Sun Jing at first but soon learns the truth, twice. She does cute things from Sun Jing and it will make your heart melt and squee sound effects are guaranteed.

Because the narrative part are mostly told from Sun Jing’s perspective and in the setting is mostly her school, Qui Tong is more mysterious. Let’s hope for more development in her character soon!

I wanted to review this manhua because, let’s admit, there aren’t that many manga/manhua/manhwa  featuring queer women as main characters that are great. Despite Tamen De Gushi being still ongoing, it may be worth a read, or a bookmark. That’s right, as it is not officially sold in English, Scanlators (people that scan and translate than upload on the internet) have taken it upon themselves to show us this great story. This reddit topic may help: https://www.reddit.com/r/manga/comments/2s0vue/disc_their_story_ch_3137/

A reminder that Manhuas are read from left to right not from right to left like Mangas!