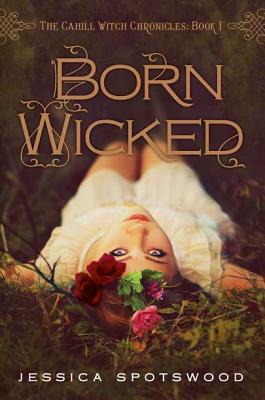 Quick note: This review does not discuss in-novel lesbianism at length, as I consider the hints and reveal to be a pretty significant spoiler. You’ll just have to trust me. Lesbians are here.

The year is 1896, the place is New England — but it is not the New England we know, not even the New England of American history. In Born Wicked, author Jessica Spotswood spins the alternate history of an area settled and ruled by the Sisters of Persephone, a group of powerful witches who lead with the shocking notion that gender, race, and religion are no cause for discrimination. The Brotherhood (a Puritanical organization that rises out of the fear of powerful women) believes otherwise, however, and after a brutal war, the Brotherhood has conquered New England, murdered the witches, and established a new system that preaches the folly and uselessness of girls, and worse, the raw danger of witchcraft.

The Cahill sisters — eldest (and narrator of Born Wicked) Cate, middle child Maura, and precocious baby Tess — are witches. Their mother, now past on, was a witch in secret, and she has passed the gift (and the burden of secrecy) on to her daughters.

With a dead mother and a mostly absent father, arrangements for a governess are made. How will the Cahill girls keep their secret hidden with another nosy body sharing their roof? Complicating matters, Cate nears her seventeenth birthday — the date by which she must announce her intention to either marry, or join the Sisterhood — an offshoot of the Brotherhood Cate loathes. Cate also receives a letter from the mysterious Z. R. that warns her of coming danger and hints at a prophesy…

Aside from the alternate history that Spotswood crafts (a history that seems all too similar to a world that certain factions of the world might embrace now!), Born Wicked offers a solidly developed character study of a young girl charged with the protection and rearing of her still-younger sisters. The ever-present threat of magic being discovered, of the embrace of education, and of simply being female all press the plot forward at an exciting pace. A world set against women creates the need for various female networks — connections made in secret, and made stronger by what they hide from the men who would have them sent to the mysterious Haywood, or even killed.

The “lesbian” aspect of this story plays a primarily background role, as Cate is most certainly attracted to men, but I expect to see it expanded upon in the sequels. Even if Cate is interested in men, she is quite open-minded considering the society she was raised in: she is conscious of the proposed dangers of magic and of such folly as lust, but slowly begins to make choices for herself and her sisters, not some ingrained stigma. I actually found Cate’s male love interest to be utterly charming — and it takes a very particular kind of characterization to make me tolerate heterosexual romance in my leisure reading!

Pick up Born Wicked as soon as possible. You’ll be drawn in by the sisters, kept open-mouthed by the threat of the Brotherhood, and tickled when lesbianism is the icing on the cake of this already very delicious book. A quick read, and appropriate for younger readers as well as old, Born Wicked left me hungry and eager for the sequel, Star Cursed which is (thankfully!) out now.