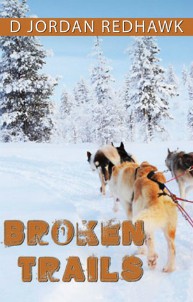 Trigger Warnings: Suicide of a minor character (occurs in the past and is recounted), and alcoholism.

Spoilers marked separately at the end.

A gripping adventure romance, set in “Big Sky Country” Alaska at the famous Iditarod dog sledding race, features a swoon worthy protagonist and a driven but out of control (at times) love interest.

Scotch Fuller is the eldest of 4 kids and winning the Iditarod is not only her dream, but her family’s life work. The Fuller family runs and operates a dog racing kennel and dog sledding tourism company. Scotch is hard working, independent, disciplined young woman. Her family is everything to her and they are her biggest cheerleaders. She has a great head on her shoulders and soft butch vibe that will make you weak in the knees.

Laney is a successful nature photographer who just finished a long assignment in Africa. She reluctantly agrees to go on a quick assignment to Alaska as a favor to her friend Ben, a magazine editor. She is physically ill equipped for the Alaskan elements and emotionally blindsided by an up and coming Iditarod star who catches her eye. Laney is dealing with personal baggage that has manifested into a drinking problem.

Scotch has an amazing rookie run to set the stage but the real adventure starts when Laney convinces the magazine (against her own better judgement) to do a series of stories about Scotch’s training for her sophomore run at the Iditarod. Ben agrees, as long as Laney trains to run the race as a rookie. Laney isn’t sure if she wants to go back to Alaska, and Scotch isn’t sure she wants the distraction of training someone. Despite Laney being a decade or so older than Scotch, they both have a lot to teach each other about life and love. The age-gap is mentioned but is not a big part of the story, nor is it a source of consternation.

I really enjoyed this book, and I am definitely not a dog person! Ever since I saw a documentary series on the Iditarod via the discovery channel over a decade ago, the sport has fascinated me. Add a lesbian romance and I was immediately drawn to it. This is a great story for someone who likes long, slow burn romances. At nearly 400 pages you really get the complete Iditarod experience from couch to finish line. Redhawk really makes you feel like you are on the sled with Scotch and Laney, sleep deprived, bitter cold hitting your face, danger at every turn.

Ultimately, I think this story is about laying yourself bare. About finding out that another person can still love you, despite scars, secrets, or shortcomings of character. That is really how Scotch and Laney stole my heart.

I am a sucker for letters, and was excited when Don gave the letter to Laney from Scotch when the race started. I was kind of disappointed it took to nearly the end to discover the contents, and given the structure of Scotch being ahead, they were only one sided.

The Tonya storyline was important to Scotch’s growth, but I felt could have been developed a little more before the reveal. It felt like she needed something to be going through, some scar to match Laney’s but it kinda felt dropped in rather than lived in.

The sex scene, the long awaited sex scene, was too short for how late in the book it came. And to fade to black when it was Scotch’s turn to be pleasured just blew the wind out of my sails. Their exchange was emotional, and their speeches at the end nearly made up for it…nearly.