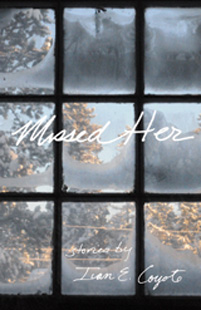 Ivan E. Coyote is one of my very favourite queer writers. When giving recommendations for les/bi/etc books, Sarah Waters and Ivan E. Coyote are at the top of the list (though their styles are pretty different). Ivan is often described as a “kitchen table storyteller,” and it’s true. Their stories read as if one of your good friends is relating an anecdote to you, if your friends are really good at telling stories. If you ever get the chance to see Ivan perform in person, I highly recommend it. In the meantime, pick up their books.

Missed Her is a collection of semi-autobiographical stories–Ivan treads the line between memoir and fiction. Some common themes run through the stories, including being queer in a small town. I find this especially interesting, because when the “It Gets Better” project was getting a lot of coverage, there was some criticism about how many of the stories talked about getting out of small towns, and how it didn’t address how rural communities can change, or the positive aspects of them, or even how constantly moving queer people out of rural environments and into urban ones just perpetuates any bigotry in hostile towns (not that anyone has an obligation to stay in a threatening environment, I want to clarify). We’re used to queer stories being set in the big city, so it’s interesting and pertinent to have another narrative. (Ivan currently lives in Vancouver, so it’s not all small town, but growing up in the Yukon made a strong impression on them.)

Ivan presents a different image of being queer in a small town. Their family was supportive, and they appreciate that the people they meet in these towns are more likely to simply ask what they’re thinking instead of skirting around the issue. They have a story set in a small town in which a bunch of men gather around so they can teach them how to properly tie a tie. They do still acknowledge the disadvantages and even dangers of some of these small towns, however, especially when they describe trying to find a rural doctor accepting of their gender presentation.

Ivan’s stories have all sorts of variety, though. There’s some heart-breaking ones and some hilarious ones, though usually it’s a bit of both. (Some topics: looking for an old-fashioned barber in Vancouver, teaching memoir-writing to seniors, repeatedly being mistaken for a gay man, stories about their family, and musings on their butch identity and the policing of the label.)

There’s not much more to say than that I highly recommend it!

4 Replies to “Danika reviews Missed Her by Ivan E. Coyote”