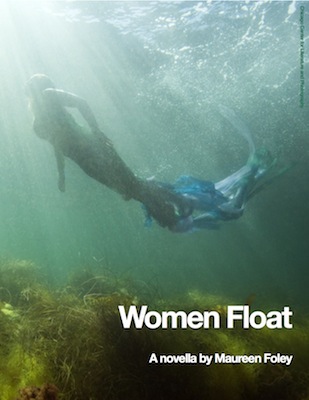 “Women Float,” Maureen Foley’s gentle and lyrical novella is a lesson in patience and painful futility of life.  The story follows Win, a baker in southern California, as she attempts to reconcile various pieces of her life.  There’s her mother, a mysterious figure who disappeared when Win was nine; Mia, Win’s best friend and unrequited crush; and Sandra, a woman who trades swimming lessons for cream puffs.  The central theme, that Foley weaves carefully through the narrative, is water and the idea of floating.

At times the metaphor is literal and blatant.  Win’s mother was a surfer, alive in the water, while Win has never learned to swim and mainly associates the water with traumatic experiences of disassociation and terror.  The swimming lessons with Sandra that carry through the book are dreaded moments of self examination.  What is really magical about this literal use of theme is it allows us access to the more nebulous aspects of Win’s identity.  We discover she’s a compulsive liar, exemplified in a terrifying scene with the people who now live in her childhood home, and is distracted by mysterious postcards that arrive from various parts of the country.  Instead of using the scene at her old home or letting the strange postcards become an obsession, Foley spends more time with the swimming lessons, bringing us into Win’s world through her own phobia and self-doubt.  We experience fear and hesitation in synch with the character instead of fighting through the steely control of her lies or the delusions of her love for Mia.  The result is a really beautifully created tragedy that still feels incredibly alive and beautiful.

“Women Float” is ultimately a tale about the futility of life.  By the end of the book, very little is resolved.  There are some answers, but the remaining questions still overwhelm them.  The ending does beg for more resolution, but at the same time there’s a degree of truth in the story’s final scenes that justifies its lack of closure.