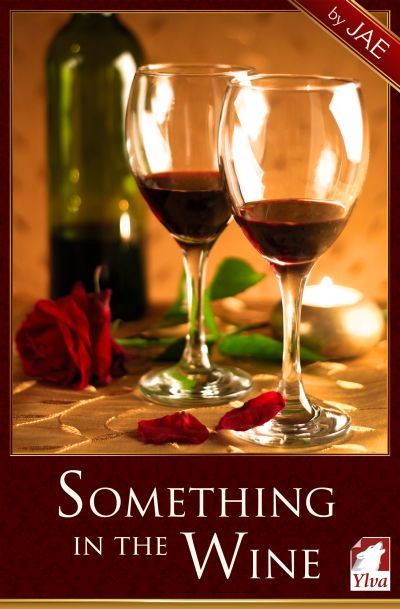 Jae’s new book, “Something in the Wine,” is a nice little page-turner that develops and delivers a satisfying story.  The story follows Annie, an accountant whose life is so boring she doesn’t realize it, and Drew, a lonely vintner.  The two team up to masquerade as lovers to play the ultimate trick on Annie’s prankster brother.  Of course, Annie enters this situation only wanting revenge on her brother, but, in classic lesbian-in-love-with-a-straight-girl fashion, Drew is more interested in spending time with Annie.

The premise is well set-up and does a good job of pulling us into the story, but Jae ultimately leans too hard on a flimsy conceit.  The plot to trick Annie’s brother justifies the increasing amount of time the two spend together as they both ignore their feelings.  Annie begins to doubt her heterosexuality and they both start to overstep boundaries.  Here is one of several instances that Jae sets up fairly high stakes of manipulation for the characters, both of themselves and each other, and doesn’t follow through.  Both characters become increasingly dependent on the trick instead confronting how they actually feel, and for me there came a time when the story’s conceit couldn’t sustain that dependency.  Jae does a really nice job with her characters, they’re interesting, intelligent and likable, and I felt this development hindered her plot.  I couldn’t believe that characters that intelligent and caring could go on manipulating each other to the degree they achieve in this story.  I wanted more from the characters, I wanted them to act on the stakes set out for them

Of course, there are things aiding the mutual denial.  Annie is plagued by painfully well-developed internalized homophobia and Drew is held back by a somewhat debilitating sense decency.  But despite her on fears and anxieties, there is very little external homophobic conflict.  Because of that Annie’s perception of her world and its prejudices didn’t seem to match its reality and I was curious about the source of that difference.  In the same vein, Annie’s parents are so distracted by their own lives that they have mostly forgotten their daughter.  Once again, Jae does a great job creating the scenario and watching the interplay between parents and child is moving and painful, but I felt there was more opportunity for exploration of the great stakes she created.

There’s a lot working for this book.  Jae does a good job building the elements of her story, but doesn’t let them percolate together.  Elements seem pushed together instead of coming to their natural conclusions.  And while I enjoyed the ending and found it very heartfelt, it ultimately wasn’t satisfying because of how much baggage I knew the characters still carried.