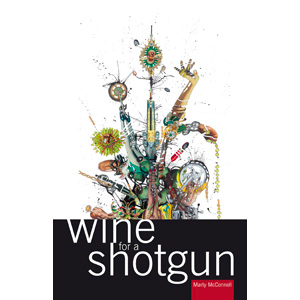 Wine For A Shotgun by Marty McConnell is the most beautiful collection of poetry I’ve ever read. Now, a caveat: I say this as a reader of fiction who is generally interested in — but hasn’t read read an awful lot of — poetry. Like Danika, I often don’t feel feel qualified to write about it. However, I’m not going to let that stop me, especially if I find something awesome. Like this.

Wine For A Shotgun deftly pulls apart the knotted mess of gender, sexuality, love, and fidelity. The collection unravels along two threads: one largely autobiographical series following McConnell’s childhood, her relationships with various family members, and experiences as a secret keeper; and another series that pushes outside of her life, inspired by the traditional Tarot deck.

In the universe of Wine For A Shotgun, human emotion changes the very fabric of reality. For example, in “When Your Ex-girlfriend’s Sister Corners You in the Kitchen,” the room comes alive in a tense situation: “you can hear / the filaments in the ceiling fixture / sizzle, the glue under the linoleum starting / to bubble. all the liquor in the house is in / the other room and your mouth is a desert / with a side of sand, you are stranded / on the moon with a woman who thinks / you can make the atmosphere breathable / just by believing it.” Of course, we all know that you can’t make the atmosphere of the moon breathable through belief alone. It’s an absurd, false choice. Yet queer people are asked to pull off similarly impossible decisionmaking feats all the time. In the above poem, the subject has been cornered and taken to task on her “queer status.” As a bisexual woman, I really appreciate the way McConnell frames the issue.

McConnell’s background is in slam poetry, and the influence is apparent in many of her poems. The cadence of “The Magician Is A Drag King,” for example, just begs to be heard aloud: “you’re a sucker / for the sideshow and I’m your spirit / gum queen, your strapped-down / goddess, your husband with a little extra / in between, I’m Venus with a goatee / I markered on myself, no Hottentot / can shame me, you can’t mock / this, I made this, my playlist / is gay bliss, go on DJ, / break it down – everybody / wants somebody. every body wants / some body. everybody wants. some. / body.”

As in the above, McConnell has a knack for picking underexplored topics — particularly queer ones — and taking a graceful, headfirst dive in to plumb the depths. In “The Chariot in Love,” she writes about the experience of being in love with a person undergoing gender transition. In “Queen of Rods on Top” she gives a big, sassy wink and a nod to genderqueer sex. In “The Fool and Her Hunger” she writes about going to a lesbian dance club in Brooklyn. Though some topics are arguably more serious than others, McConnell gives careful consideration to each, and finds significance where others might easily overlook it. It is this quality which multiplies the importance of her work. Plus, like I said: her writing is really beautiful.

Wine For a Shotgun is currently a lambda award finalist under the category of lesbian poetry. Marty McConnell is performing April 2 at the Urbana Poetry Slam in New York City.