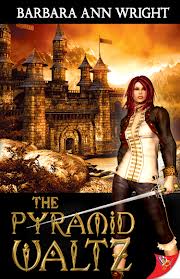 To most, Princess Katya Nar Umbriel is a rogue and a layabout; she parties, she hunts and she breaks women’s hearts. But when the festival lights go down and the palace slumbers, Katya chases traitors to the crown and protects the kingdoms greatest secret: the royal Umbriels are part Fiend. When Katya thwarts an attempt to expose the kings monstrous side, she uncovers a plot to let the Fiends out to play. Starbride has no interest in being a courtier. Ignoring her mother’s order to snare an influential spouse, she comes to court only to study law. But a flirtatious rake of a princess proves hard to resist, and Starbride is pulled into a world of secrets that leaves little room for honesty or love, a world neither woman may survive. — Kobo synopsis

Now, readers: not only am I an old-school Lynn Flewelling fan, but I’m also a queer woman with a pulse. If the dishabille exploits of Seregil of Rhiminee and his awed lover Alec had me grinning and giggling all over the place, then just imagine what the rakish, insouciant Katya Nar Umbriel and the intrepid Starbride did to me, and you have the heart of this book. The Pyramid Waltz has had me smiling for three days.

In terms of plot, it’s mostly what it says on the tin. Lots of chases. Lots of alleyways and castles and ballrooms and bedrooms. We meet the fiendish princess Katya as she is chasing a traitor across her father’s hunting grounds, all whilst Averie (who is quite possibly the best lady in waiting of all time) hunts deer for her so that she can keep up the ruse of being forever out and about after wildlife. Starbride, meanwhile, is tolerating being treated as an “exotic” oddity by the princess’s court only because it gives her accezs to the library, and to laws that will, she hopes, stop these richer neighbors from exploiting her land. They meet. Sparks fly. Sparkly things are exchanged, along with kisses and gorgeous— if broad—banter, All the dialogue seems to come from the Mercedes Lackey school of feel what you’re feeling before saying it adverbially, and the novel also reads a little bit as if Wright read Dianna Wynne Jone’s Tough Guide to Fantasy Land (tavern brawls and all!) and decided to follow it verbatim. But it is so much fun that I really don’t care. I also haven’t actually read this assortment of cliches in a world that is entirely unfazed by homosexuality or female power before. I think I love it.

The characters are all kindly drawn—keep an eye out for Katya’s blustering father, and a hilarious aside about his inability to read his children bedtime tales because he kept trying to find the racy bits. The masked Pennynail is also a hoot, and one of the few actually mysterious parts of the mystery. I also loved that while the relationship between Starbride and Katya was near-instantaneous, they also misunderstand each other regularly and tried to get into each other’s worlds—Starbride much more successfully than the more privileged Katya. One thing the novel does surprisingly well is address colonialism and white privilege, albeit briefly. There is a very strange take on master and servant relations in Starbride’s home might be dubious, but that was the only real quibble I had with The Pyramid Waltz once I’d settled in for the romp. Mostly, I’m just delighted this book exists.

(…and is there any waltzing involved, darlings? Read to find out!)