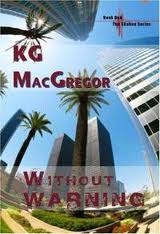 Taking my cue from a comment on my last review, I read another KG MacGregor book, this time Without Warning. The book is the first in her Shaken series, which originated as Xena-based fanfiction (available here). In Without Warning, lawyer Lily Stewart and car dealer Anna Kaklis are both inside a mall in Los Angeles when an earthquake causes portions of the building to collapse. In a clothing store when the quake hit, Lily encounters and frees Anna, who is trapped under a fallen bookshelf in a different store. The women join forces to escape the crumbling structure, which is being wracked by aftershocks. After making some progress toward an exit, and learning more about one another, Anna manages to get help for Lily when her asthma threatens to suffocate her.

The earthquake and mutual life-saving creates a deep bond between the women, but a mix-up means that they don’t see each other for seven months–on the day of Anna’s divorce from the unsuitable Scott. Once reunited, the women find themselves drawn to one another, although the out Lily worries whether she can keep her feelings for the Amazonian Anna strictly platonic. Their path to couple-dom is a little bumpy–family pressure in the form of Anna’s conservative father and a misunderstanding that makes Lily doubt Anna’s feelings–but happily resolved.

I liked several things about this romance. First, the pace was slow. Lily and Anna don’t fall in love at first sight (it is, after all, extremely dark in the wrecked mall). They have a chance to get acquainted when they’re stuck together waiting for rescue; otherwise they would have been very unlikely to cross paths socially or professionally. Lily comes out to Anna almost immediately–there’s none of that “I didn’t tell her and if I tell her now she’ll wonder why I lied about it” stuff–and it takes Anna a while to figure out the direction of her feelings, including a visit to her college crush. I liked the consistent thread of humor throughout the book, especially the teasing interactions between the main characters. Without Warning reminds me, in the best way, of some of my favorite Xena uber fiction, including work by Ann McMan and Melissa Good.

But I really need to stop reading books with characters named Anna.