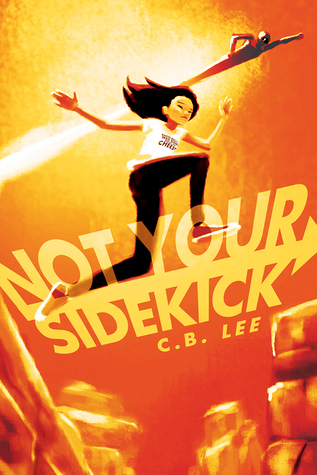 Five words: lesbian, bisexual, and trans superheroes.
Wait, I think I need a few more.
Lesbian, bisexual, and trans superheroes taking on the kyriarchy, falling in love, and just… being kids.
Jessica Tran doesn’t fit in. I know, not the most original premise. But along with all the normal crap teenagers worry about– mediocre grades due to excessive daydreaming, crushes on intimidating Volleyball players, jobs and internships and college applications… Jess has the added pressure of being the only person in her family who hasn’t exhibited superpowers.
It’s been ten years since I was Jess’s age, and the world has changed a lot since then. Back in my day, most of us didn’t have smartphones, or Facebook, the endless scroll of notifications. Not Your Sidekick takes that technology a step further, into a world with holographic communication devices on every wrist, driverless cars on every street, and a robot housekeeper in every home. Despite the surface convenience, the infrastructure of North America has crumbled, good jobs are scarce, and all that flashy technology? It’s constantly malfunctioning.
Is this gonna resonate with the tumblr generation, the “millennials,” those of us disenfranchised by our currently-crumbling systems of government? Oh hell yes.
The cool thing is, Not Your Sidekick doesn’t just offer up a hopeless dystopian nightmare– it shows the world on the verge of being fixed.
This is a story about false binaries, and how one can go about smashing them. Jess starts off the story as bisexual with no qualms about it, which is refreshing. She does struggle with her cultural identity, as the child of Chinese and Thai refugees from the Southeast Asian Alliance– too American for the Thai sandwich shop, too fobby for her old friends from Chinese School. Finally, there’s the titular binary, the concept of heroism versus villainy. Who decides which is which, and why?
Okay, so I’m a sucker for worldbuilding, especially when it doesn’t forget that a major continent exists. But I also thought this novel shone when it came to its portrayal of the intense platonic love that can form in a tight-knit group of friends, as well as the complicated dynamic of idolization turning to genuine love.
The novel is not without its flaws. Some of the prose seemed unpolished, the twists predictable, the pace a little too rushed. But Not Your Sidekick is also Not Your High Literature. It’s camp. It’s trope-y. It frequently defies the laws of physics. (When one or more of your characters can manipulate gravitational fields, that will happen.) If anything, the way the narrative played so seamlessly into superhero tropes made me visualize it as a movie–and man, that would be a good movie.
Let me put it this way: there is a glut of blatant wish-fulfillment books, movies, and TV shows about male superheroes. There is a handful about female superheroes. Before Not Your Sidekick, I could think of one lesbian or bi superhero whose sexuality was explicitly mentioned in a long-form work, and she was killed off (Black Canary on Arrow). Not Your Sidekick is the story LGBT fans deserve, AND the one we need right now. My biggest problem with it?
It’s the first of a trilogy, and we have to wait until 2017 for the next one.