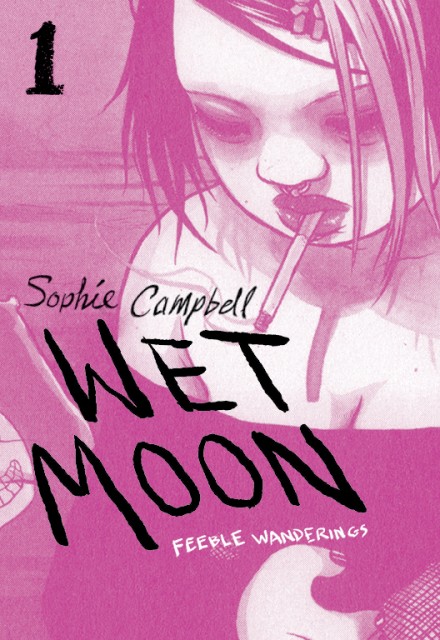 I must start this review by saying that I never read graphic novels—not for any particular reason besides that I never felt drawn to any—but this one intrigued me. The cover itself looked so ethereal yet dark and gave off the same vibes as the Southern Gothic stories I loved so much as a teenager, which is funny since the series is about a group of goths in the South.

Wet Moon Volume 1 follows Cleo Lovedrop and her friends as they begin their freshman year at an art school in the fictional town of Wet Moon, Florida. There is romance, mystery, and something even more sinister just beneath the surface of this swampy town…at least I think. Even after reading through the first book three times, I’m not entirely sure what is supposed to be happening, mostly because nothing seems to be happening yet. It is clear that some of the characters are not straight though, so I do know that much.

It seems to me that Campbell meant for this book to be an introduction to the series, but it’s a hazy introduction at best. It’s clear that there are issues between certain characters (like Cleo and the mysterious guy she keeps bumping into) but it isn’t clear enough to build suspense necessary to keep me reading.

The lack of plot and clarity are part of a bigger issue: the writing. Campbell’s writing is the biggest downfall. Writers who say can a lot in a few words are hard to find, and that’s what this book needs to have the same impact that the artwork has.

However, even without much of a plot or much clarity, the book probably could have been saved with well-rounded, interesting characters. Unfortunately, the characters seem more like middle-schoolers than college kids, and none of them are very likable; when they aren’t at each other’s’ throats (they don’t seem to have healthy or even pleasant friendships) they come off as generally uncaring toward other people, or in Cleo’s case, whiny and needy. The most likable character seems to be Audrey, but she still isn’t very interesting.

Reading this book was a bit of a struggle, not just because of the writing quality, but also because the words themselves were sometimes hard to decipher. They seem to be written in Campbell’s handwriting, which means that when one character has a lot to say, the words are crammed in one giant bubble. The journal entries were especially hard to read; I found myself spending a long time trying to read  them, and then when I finally did, I was frustrated to discover that they added very little to the (almost nonexistent) plot.

The one saving grace of this book was the artwork; it is absolutely gorgeous, and all of the characters are unique and diverse in terms of race, body type, etc. My favorite panels are the ones where Cleo and Myrtle look at themselves in the mirror. In some comics, they would have been drawn to look sexually appealing, but instead they looked like real women in the privacy of their bathrooms.

I only wish Campbell had hired someone else to write the book or to work with her on it. The artwork deserves much better accompaniment.