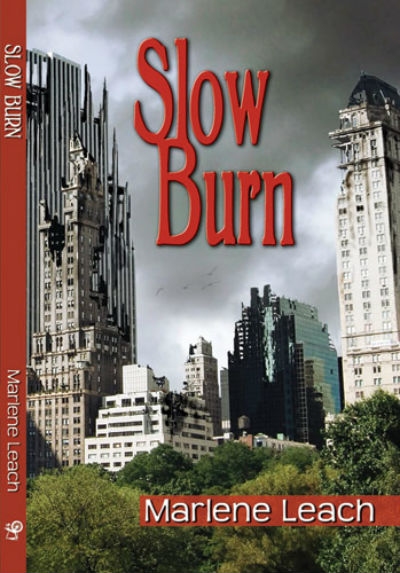 If truth be told, very little offends me. After all, I spent several years reviewing erotica back in the 1990’s, before the genre assumed any sense of responsibility with regard to consent, transparency or human dignity. However, in spite of all that fell short within Slow Burn, author Marlene Leach succeeded in utterly sickening me with scenes in which women with traumatic histories were either taken while in a dissociated state and physically incapacitated or used for the reclamation of one’s own fractured sexuality. That being said, what put me over the top was one particular scene in which continued sexual manipulation was condoned for its ability to heal the victim. I am floored that any author, especially one writing for the LGBT community, would dare promote sexual practices that perpetuate trauma as a means to a happy ending.

But, I get ahead of myself…

The year is 2048. The country is on the verge of collapse as corporations have taken over virtually every aspect of society, from governmental functions to the school and transportation systems as well as access to information and technology. The air is unfit to breathe, and domes are established within cities — until the money runs out. Testing determines one’s future, while those who exhibit dissenting tendencies are promptly medicated and monitored.

A year to the day that her lover, Leah, a renowned social critic and political activist, is captured by government agents and presumed dead, Lydia is prepared to end her own life; yet, a rap on the door late in the night interrupts her plans. When Lydia frees the latch, she discovers a young woman of eighteen, named Kay, who informs her that Leah is still alive and that she is willing to help Lydia find her. Kay explains that she was introduced to Leah’s writings by her history teacher, later deemed to be a Dissenter, and had found that her words and ideas helped her to feel less alone in the world. Leah was her idol, a brilliant and influential woman with whom she had hoped to one day study.

After a series of unlikely events which facilitate their journey from Maine to California, Lydia and Kay rescue Leah from Pennington Labor Camp. Leah is emaciated, reeks of her own waste, is missing teeth and suffers from oozing open wounds. Though Leah is unable to walk, the three women are able to find shelter in the woods, where Kay assists in her recovery. Rather than contribute to the restoration of Leah’s health, Lydia, absorbed in her need for closeness, performs oral sex on her partner while Kay is away on a supply run. The way the scene is written, wherein Lydia determines that Leah deserves the pleasure of her lover’s “eating her out” while Leah is yet unable to ambulate or take food, proved simply gruesome. Call me conventional, but this is simply not something I would expect of a loving and committed partner.

At varying points in the novel, both Lydia and Leah express their attraction to Kay, who has endured more than her fair share of pain and is described as being emotionally stunted. Whereas Lydia cuddles her in a manner that comes across as downright creepy but supposedly nurturing, Leah takes full advantage of Kay’s trust and admiration in order to touch upon her own lost ability to access desire. Rather than stopping the behavior upon realizing the gravity of her destructive behavior, Leah continues to seduce Kay so as to assist in her healing.

The novel overall is clumsily executed and wholly unbelievable, from the introduction of the characters right down to its victorious conclusion. Yet, it is the condoning of sexual manipulation and exploitation that continues to stick in my craw. Bring on the edginess and the challenges to sexual mores; but, once a traumatized adolescent is used for the pleasure of the middle-aged woman who she upholds as a teacher and mentor, I’m no longer on board.