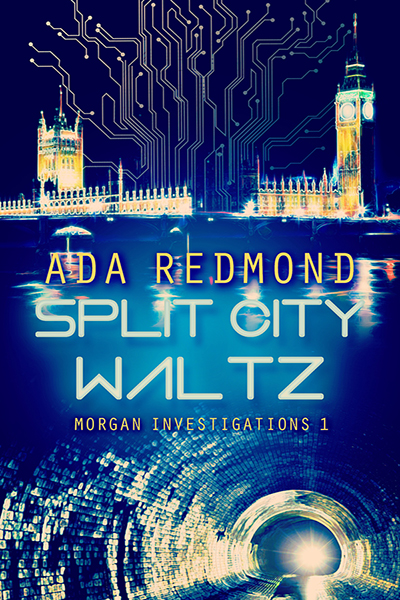 Split-City Waltz takes places in a futuristic London where society has become sharply divided, philosophically and physically. Above-ground in the shiny Metropolis live everyone embracing technology that tracks and reports everything about their lives. Below, in the old underground network, live the network of people rejecting constant, invasive monitoring.

Allyn Morgan lives topside, working as a PI after being fired from her position as security chief because of a mysterious event that left her with major cybernetic reconstructive surgery. Allyn is a plucky and smart heroine, though just foolish enough to do a favor for an ex who she already suspects is working her. She ends up in deep trouble, and the only one who can help is the hacker, Terminal, a resident of the underground. This isn’t a romance so much as a How We Met story, with Terminal remaining mysterious throughout. Though she earns Allyn’s trust through their adventure. The penny waiting to drop is whether or not they’ll ever see each other again after they resolve their mutual problem.

Split City Waltz has excellent world-building, crafting a believable cultural shift that split the city into two groups – those who are tracked and those who forcibly removed their trackers in an event seared into the collective memory. It’s is a fast-paced, tech-filled run of break-ins and general sneaking around.

The only problem is that it was 15,000 words long and I was expecting a novel. Shame on me, honestly, for not checking the word count, but this isn’t the first time I’ve been fooled by this shape of a story in this genre. Can we give it a name? The short prequel? A novellatroduction? It’s too big a world for a short story, because it’s meant to be introducing a larger universe, and in this case, a series. But it’s too small to be a stand-alone. You’re left wanting by design.

I was three-quarters of the way into it when I realized it was almost done! Credit to Ada Redmond for keeping me on the wild ride, but it brought me up short when I realized we weren’t getting anything more than the set-up for a romance.

Sequel-delayed gratification makes sense, since Allyn is still working through her issues with her ex. The majority of scenes were action, so there was little time for Terminal and Allyn to even be in a room together, nevermind flirt. Terminal does hack directly into Allyn’s ear, so that was badass and a great opportunity for uncomfortable intimacy, but Allyn’s mission to find out Who Burned Michael Weston who set her up kept us moving forward. All romance had to wait. For the next book.

Read Split City Waltz if you love cyber-enhancements, hackers, the brains and the muscle pairing set-ups (Definitely recommended for fans of Person of Interest’s Shaw/Root!), and world-building of a future society that seems pretty plausible. But beware that it’s fast and short, and you’ll have to be patient for the next installment of Allyn and Terminal’s story.