This guest lesbrarian post is brought to you by Stefanie and was originally posted at Elevate Difference. Thank you so much, Stefanie! 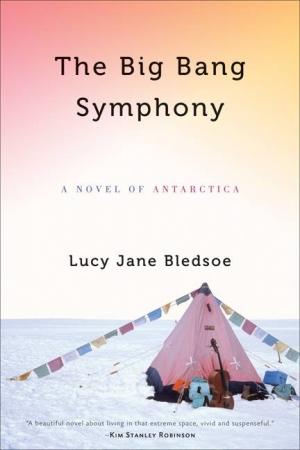 Lucy Jane Bledsoe’s The Big Bang Symphony begins with one big bang and ends with another. A plane crashes on its way to McMurdo Station on Antarctica while carrying several of the continent’s summer residents, including Rosie Moore and Mikala Wilbo, two of the three female protagonists of the story. Everyone survives except for one unnamed woman; we find that her death and the crash subsequently inform the lives of the main characters, as we follow Rosie, Mikala, and Alice Neilson as they attempt to carry out their respective work on “the Ice.”

Each woman has come to Antarctica in search of something: for Rosie, a constant traveler with strained family relations, it is money toward the purchase of her first stable home; for Mikala, a renowned up-and-coming composer, it is a father she never really knew and an escape from the grief still following her after her partner’s death three years prior; for Alice, a geologist and the youngest among them, it is evidence that the earth has survived previous global warmings and will continue to do so. Each search revolves around at least one man in the characters’ lives, though the women’s burgeoning relationships with each other come to dominate and fortify one another in achieving their separate quests.

Rosie makes a strong impression on Mikala in the aftermath of the plane crash and ignites her romantic, sexual, and musical interests. Mikala cannot get Rosie out of her mind, even as she struggles each day to write the first music she has composed since her partner’s death. Rosie, in the meantime, becomes obsessed with one man, all too married, and distracts herself with another. Alice, committed on several levels to her advisor, finds herself pushed beyond her comfort zone and begins to emotionally react in ways she has never let herself do before. When an emergency strikes, the women are tested and find themselves opening up to experiences that had previously challenged them, causing them to change in a setting hostile to most growth.

The reader will quickly find that Bledsoe’s choice of setting—the gorgeous, yet deadly landscape of Antarctica—figures as a main character in and of itself rather than simply as a background against which the action of the novel plays out. Indeed, it is the ways in which the characters live on and with such an inhumane environment that propels each to reach out to one another to attempt to accomplish their goals and survive the short, harsh summer at the South Pole. Bledsoe consistently, if occasionally awkwardly, imbues each chapter of the novel with the themes of life and death, music, travel, and the relationship between an individual and the cosmos.

The Big Bang Symphony was a compelling read from the start, save perhaps the initial chapters written from Alice’s perspective, which can be frustrating in terms of her double devotion to both her mother and to the fastidious nature of science. Rosie’s and Mikala’s stories easily make up for this, however, and as Alice comes into her own on Antarctica, I soon found her narrative equally complex and interesting. In Rosie, Mikala, and Alice, Bledsoe clearly created characters who never would have met had it not been for the coincidence of living on the Ice together; their obvious differences make their incipient and meaningful friendship all the more captivating over the course of the story.