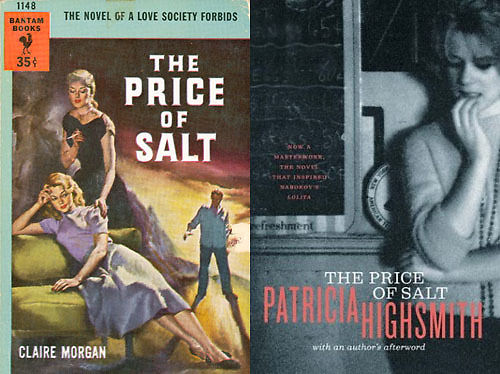 When this novel was published in 1952, it was Controversial with the Capital and thus, naturally, immensely popular. Patricia Highsmith – apparently a pretty renowned author but not a particularly likable personality – wrote it under the pseudonym “Claire Morgan” and denied having anything to do with the book until much later on in life, when it was revealed that it was based extensively on her own personal experiences. It’s toted as dark and mysterious, and said to bear uncanny resemblance to Vladimir Nabokov’s Lolita – and it came first. Recipe for a perfect lesbian-themed book? I thought so.

…while we’re talking about enamour, though, let’s get to the good stuff first:

Carol kissed her on the lips, and pleasure leaped in Therese again. […] Her arms were tight around Carol, and she was conscious of Carol and nothing else. And then her body too seemed to vanish in widening circles that leaped further and further, beyond where thought could follow.

(I have to admit I didn’t choose this excerpt on my own – usually I would, but I’ve returned the book to the library so I just googled this.) Highsmith’s prose is powerful and elegant and I don’t only mean this in reference to the lovemaking scenes like above; I particularly liked her descriptions of the setting and the general feel of the book. New York in 2011 is charismatic and alluring, but New York in 1952 is downright sexy.

What I felt was lacking was character development, which is a pretty key element in any book but especially one that’s centred on just two individuals. (I know this sounds somewhat contradictory, but you can have powerful prose without similarly powerful plot progression, as anyone who’s read the original Frankenstein can attest to.) The premise of the characters is interesting enough – inexperienced but already cynical 19-year-old paired with a tired but not quite jaded middle-aged woman – and as I pieced together bits of their stories throughout the book it’s evident that they aren’t your usual lesbian clichés, but at no point did either Therese or Carol become real to me. I was especially frustrated by the lack of build-up to their relationship, because while I could understand (somewhat) why they’d be attracted to each other based on their lots in life, I felt like it was more my own filling-in-the-blanks rather than a narrative that was presented to me. I figure more emotional aspects of their story might have been glossed over in consideration of the era in which the book was written, maybe, because it is not altogether uncommon for characters in books of yesteryear to fall in love for no discernible reason. Nonetheless, I can’t say I didn’t care for the characters: I interrupted my pseudo-New Year’s celebrations to “see if my lesbians get a happy ending.” (Chances are if you’ve read about this book anywhere you’ll know the answer to this, but I didn’t and I try my best to write spoiler-free reviews so I won’t give it away.)

I have to admit that at the end of it, I’m still left in the dark as to why the book is called The Price of Salt. I know it’s mentioned a couple of times in the book but there appears to be no significant meaning to it and I can’t find a satisfactory explanation online either. (The actual price of salt, by the way, is not as easy to determine as you’d think.) This was, to me, quite a waste because it’s an intriguing title and it’s a big part of the reason I chose to read this book.

By way of coming-of-age lesbian novels, I’d still say that Sarah Waters’ Tipping the Velvet takes the cake and then some but The Price of Salt is still an interesting piece in its own right. This book would probably be better appreciated if actually read in the 20th century as intended, but there’s nothing any of us can do about that eh?

Thank you so much for the review, Orange Sorbet! You can find Orange Sorbet’s blog here, and the original post of this review here.