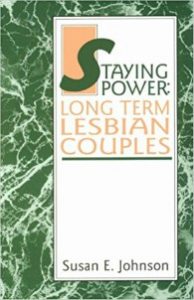 Published in 1990, this book draws from Johnson’s study of over 100 couples who have been together a decade or more. Her research included questionnaires, in depth interviews, and opportunities for those in her study to write in detail about their relationships. I picked it up because I’m interested in long-term partnership and especially because I love reading lesbian nonfiction from previous decades. I found this book more relevant than I anticipated and I recommend it not only to those interested in lesbian history but anyone who wants to be in a long term partnership.

Johnson includes extended transcripts from conversations with eight couples as well as study findings around major themes that emerged such as commitment, sexuality, and problems. Quotes pepper every section and the women’s stories are amazing. There were a lot of different attitudes and approaches to relationships and a broad range of ages. One of the couples in this book had been together for more than 50 years and reading about their life together was worth picking up the book even if you take nothing else from it.

There is practical advice in this book but more than that there are interesting stories. Some of the couples had relationships I would never want and some had relationships I thought sounded incredible. Some couples were monogamous, some were poly, and some had become celibate. Some had formalized and celebrated their relationships to the extent they were able to at the time and some were largely closeted. A handful were raising children. I found some new ways of envisioning a long term relationship and gained some insights that apply to my own marriage.

The one major shortcoming of this book is that nearly everyone in the study was white. Only 6 out of 216 women in the study were women of color and all of them were partnered with white women. Johnson admits this huge flaw in the study early on but it didn’t appear to me that she did much to try to correct it once she became aware that her outreach efforts were dramatically underrepresenting people of color. She suggests that other researchers, especially women of color, do their own studies to correct this, but I would have liked more attempts to remedy this huge imbalance in her research. Subjects in the study were also more educated and skewed wealthier than the average population. Probably due to the era it was written, trans people aren’t mentioned at all. My only note of caution for interested readers is that you’re getting a book almost exclusively about white cis women and most have a fair amount of class privilege, so the perspective is limited in this way.

Still, I found this book useful. I would recommend it to those interested in recent queer history or in long term partnerships. Whether or not you can apply the ideas in Staying Power to your own life, it’s fascinating to see how marriage equality and increasing ability to be out have shifted intimate relationships over the last few decades. Keeping in mind its limitations, it’s interesting book worth checking out.