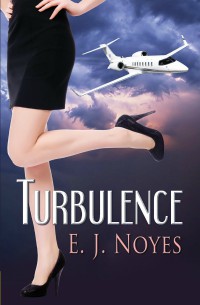 Isabelle has smoking hot sex with a one-night stand she thinks she’ll never see again – and then promptly sees her again the next day, flying her private jet: it turns out Audrey is her new company pilot. The two continue their sexual relationship, claiming they want to keep things casual – but amidst all the ups and downs of her busy life, Isabelle starts to see Audrey as a steady constant, and begins to realize her feelings about Audrey are anything but casual…

I wanted to like Turbulence: though the plot felt somewhat predictable (once you get past the mega-rich stockbroker/private pilot pairing, it’s a pretty standard trajectory of casual lovers falling for one another), the writing is decent (for the most part), and the sex scenes are well-written (for the most part). But I just could not get past how annoyingly spoiled and self-absorbed Isabelle is.

She makes lots of snotty comments that center on how rich she is, like droning on about how much her therapist costs, or saying Audrey would make her crack “like a shitty set of gel nails from a two-dollar manicure place.” She also acts entitled to others’ time: she decides on a whim, without consulting with Audrey, to take a trip in her private jet to her hometown, and thus making Audrey come too, to pilot the plane – all because she wants to the two of them to spend time together. In the arc of the novel it becomes a chance for Audrey to bond with Isabelle’s mom, and to cement how right their eventual love will be – but from my perspective it just felt like a totally odd thing to do.

I thought at first that there would be some kind of redemption arc around it: Isabelle would be brought down to earth as she got to know Audrey, and would become less of a brat, and they would live in love happily ever after – the end. But that wasn’t the case – I still can’t tell if she was supposed to be this egotistical and the story arc just wasn’t resolved, or if her brattiness was somehow accidental on the author’s part. Isabelle’s actions seem all the more strange in conjunction with how the author plays up her humble, down-homey upbringing and her many large donations to charity – her character feels very disjointed.

Unfortunately, Isabelle’s personality made Turbulence unpalatable for me – I prefer my romances with more emotional depth, and a more realistic emotional journey.