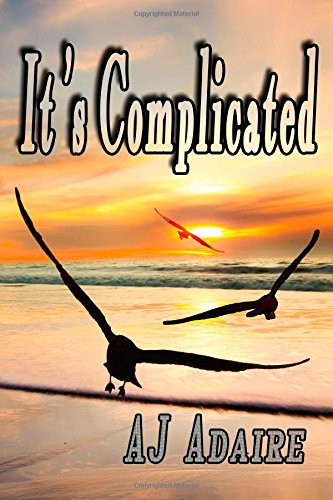 When It’s Complicated opens, Tori is a lonely lesbian in her mid-thirties, living on the Jersey Shore and spending all her time at the medical facility where she works as a night pharmacist and where her partner, Liz, receives care. Liz has been in a coma for three years following an accident. Doctors know that Liz will almost certainly never regain consciousness, and that even if she does she may need extensive care for the rest of her days. The life Tori and Liz shared for almost a decade is a thing of the past, and it’s made worse because Liz and Tori never legally formalized their relationship, so Liz’s homophobic parents make all her medical decisions. It was Liz’s parents who decided to keep Liz on life support even after it became obvious that she’d never wake up, something Liz would not have wanted. Liz’s parents also moved her from Philadelphia—where Liz and Tori lived, worked, and had friends—to a medical care facility in New Jersey. Tori left her job, her support network, and even her dog to be closer to Liz. Since the move, Tori spends six to eight hours every day talking and reading to Liz and visits during her work breaks too. Tori’s only friend is M.J., Liz’s nurse.

The bright spot in Tori’s dreary is situation is an attractive female runner who jogs near the boardwalk. Tori makes a point of visiting the boardwalk during the woman’s daily run, but feels terribly guilty for her attraction, which she thinks is disloyal to Liz. When Tori and the runner, Bev, meet-cute in the grocery store and discover that they’re neighbors, the friendship takes root instantly. Even more conveniently, Bev is single, gay, just about Tori’s age, also works nights, and is new in town and eager to make a friend. Bev has a tragic back-story of her own, and has been too insecure to go on a date in years. Her interest in Tori makes her want to change that, except, as Tori explains early on, it’s complicated. Tori considers herself to be in a monogamous relationship with Liz until one of them dies, and Liz is still technically alive.

All of that happens within the first few chapters. What follows is an intense friendship between Tori and Bev, and a lot of lesbian processing with friends, family, a therapist, and each other. Bev and Tori have fun and there’s a subplot about match making for their straight friends, but the meat of the book is two people trying to figure out the boundaries of their relationship. If more than a hundred pages of dissecting feelings about feelings makes your skin crawl, avoid this one.

But if you are in the mood for a novella rich in lesbian processing, It’s Complicated is a decent read. It’s inelegantly written at times and Adaire has a tendency to tell rather than show, but it’s a sweet enough story. I had fun reading this book, though I couldn’t quite believe the premise. I found Tori’s guilt about having a crush and the number of hours she devotes to Liz over the top given the number of years since the accident, Liz’s prognosis, and the excellent professional care Liz receives. Tori even worries she is being emotionally unfaithful to Liz by becoming good friends with attractive Bev, a fear that people in the book treat very seriously but I found hard to swallow.

There were a few other things in this book I found baffling. Liz’s parents’ unrelenting anti-gay sentiments came with no explanation. They were cartoonish homophobes with nothing much else to them. I don’t like flat villains, and I couldn’t figure out why they weren’t fleshed out as characters. Another head scratcher is that Tori never talks or even thinks about the life she and Liz had dreamed of having together. Tori and Liz were only in their thirties at the time of the accident and considered themselves committed for life, so you’d think they shared some vision of what that might look like. Tori misses Liz, but she never mourns any plans or hopes they had for the future. Liz was quite closeted for reasons I didn’t find believable in a modern, East Coast city. Taken together, these things reminded me of “tragic lesbian” stories from earlier decades, not from the book’s 2012 setting.

That being said and despite the sad subject matter, I found it a relaxing read when I suspended my disbelief. The biggest problem I had was that the ending felt rushed. Without giving anything away, a huge surprise appears after what seems like the climax of the book, and isn’t given the time to be realistic resolved. Most of the book unfolds at a slow and steady pace, but the last thirty pages are stuffed with information. It’s a jarring shift, and made the extremely tidy ending feel unearned. It’s unfortunate, because I would have liked the ending fine if it hadn’t happened so quickly. If you like angst and heaps of processing, I recommend it for lesbian romance fans, with a warning that the ending falls short.

One Reply to “Elinor reviews It’s Complicated by A.J. Adaire”