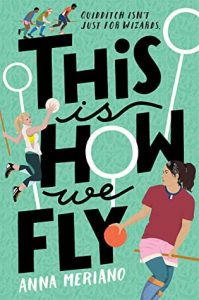 I want to start by being clear that this does not have a sapphic main character, but it does have multiple sapphic side characters and subplots, which is why I’m reviewing it here.

If you still have complicated nostalgic feelings for Harry Potter, but you also want to read a book that says “Fuck TERFs” (literally–that’s a direct quote), This is How You Fly is for you. It follows Ellen, who has just graduated from high school and is trying not to think about what happens next. Her friends are excited about university, but she’s terrified. Not that her life is going that well now: she fights constantly with her stepmother, one of her best friends is pulling away from her, and she just got herself grounded for the rest of the summer.

As I said to start, Ellen is not sapphic. She does have complicated gender feelings–she’s questioning. One of her best friends, Xiumiao, is a lesbian, and she’s been struggling with an unrequited crush on their other best friend, Melissa. Xiumiao decides to distance herself from Melissa to try to get over her, and she is diving into preparing for college. Ellen feels like she’s being left behind, so when Melissa joins a quidditch team and convinces Ellen’s parents to have athletics be an exception to the grounding, Ellen throws herself into it. The team is co-ed, and there are a lot of queer players on the team. I enjoyed seeing Ellen start from scratch at this sport. She’s not athletic, but she’s determined to improve, and she finds joy in this even when she’s having difficulty keeping up.

This is a story that’s a little bit messy, which I loved. It deals with a lot. It’s a very, very loose Cinderella retelling, with quidditch instead of balls. The dynamic between her and her family is complicated and feels realistic. Ellen is also a main character I don’t see very much: she’s a feminist teenager who is passionate about social justice. She is vegan and tries to call out people for casual sexism, racism, homophobia, ableism, etc, even if it’s her friends or family. Usually those characters are dismissed as annoying or a joke, but I (unsurprisingly) felt very sympathetic for Ellen. She doesn’t understand how her parents can dismiss injustice so easily. She’s also mixed race–half Mexican-American and half Irish-American–and constantly feels like she’s an imposter. Her stepmother is from Mexico, but her mother was born in the U.S. and passed away when Ellen was a young child. She doesn’t know how much she can claim as her heritage, and some part of her is envious of her stepmother’s more direct connection to her culture.

This is also a nerdy book, of course. There is a lot of discussion about Harry Potter, including talking about how to address JK Rowling’s transphobia in the fandom. She’s active on Tumblr, saying: “Tumblr is the lawless internet hovel where extreme fan culture meets extreme opinions and extremely pointless junk posts, and I love it to death.” I appreciated this, because I’m still on Tumblr, but I don’t know how realistic it is. Apparently in 2019, less than 1% of American teens use Tumblr. Of course, I’m sure a similar percentage play quidditch, and there’s probably more overlap there.

Although this book doesn’t have a sapphic main character, there are multiple sapphic side characters, including one that is a major subplot. I’m going back and forth on whether naming it is a spoiler, because clearly the book means it to be a surprise, but a) identity is not a spoiler and b) I definitely saw it coming several hundred pages in advance. Suffice to say that there is significant F/F content, though not with the main character. As for Ellen, I appreciated that her romances are also messy and complicated. It shows that you can be attracted to people you don’t necessarily like, and it allows Ellen to explore her feelings and attractions.

I had a great time reading this book. Multiple times, I found myself staying up hours later than I meant to because I couldn’t put it down. I highly recommend this for former or conflicted current Harry Potter fans who denounce JK Rowling’s transphobia or for anyone who is or was a loud-mouthed teenage feminists (I mean that as a sincere compliment).