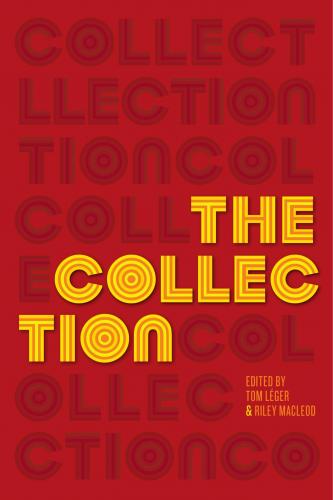 When I first heard about The Collection: Short Fiction from the Transgender Vanguard, I thought it sounded amazing, but I didn’t think it would be relevant to the Lesbrary. Luckily, I was completely wrong! There are about 9 stories that I consider relevant to the Lesbrary (either bisexual or lesbian women, or genderqueer/genderless/agender stories). That’s a third of the stories in The Collection!

This book really does something that hasn’t really been done before: it’s a professionally published anthology of literary short stories, all featuring trans main characters. There is such a lack of representation of trans people (especially main characters) in literature, that you might expect an anthology to have to stretch to find enough content. Instead, this is a hefty 400 page book which is packed with really high quality stories. Although as with all anthologies, I like some stories better than others, I found the overall quality of writing to be excellent: much better than I would expect from any anthology. Although there are a few fantastical stories, and a superhero story, most of the stories in this collection are realistic and down to earth (one focuses entirely on the main character’s miserable Tuesday working in a coffee shop, dealing with endless microaggressions). The writing flows together well, also. They seem to have similar styles, which makes it pretty easy to move from story to story without getting whiplash. I sometimes get irritated with short stories that end without a real conclusion, as if they were just excerpts from a novel. For the most part, I found the stories in The Collection to be well-crafted and satisfying by their conclusions. Satisfying does not necessarily mean uplifting, though. Many of the stories deal with prejudice, microaggressions, and general discomfort. It can be be uncomfortable to read someone being continually misgendered and misunderstood by the people around them, but they read honestly and as affirmations of many people’s realities, which is necessary and even hopeful in itself. There are also more positive stories included (the superhero one previously mentioned is one), but for the most part The Collection does reflect the reality of being trans in a cissexist world. (Though I am cisgender, so of course I can’t claim to fully understand that reality.)

“To the New World” by Ryka Aoki: You know what I said about this collection sometimes being uncomfortable to read? The main character in this story, Millie, is completely loveable, but she is into Sierra, a “radical” lesbian who is casually transphobic and racist (Millie is Asian). It is painful to read, but sadly completely believable.

“Other Women” by Casey Platt: Another uncomfortable story. Sophie deals with a tense relationship with her family after coming out as trans, with microaggressions from friends along the way. Only her best friend, Megan, really seems to understand and accept her. And then that gets messed up, too. Sophie seems to be bisexual, but by the end of the story I’m not sure what to think. Really, I think she’s just looking for someone to see her the way she wants to be seen.

“Greenhorn” by K. Tait Jarboe: This was one of my favourites. Olivia is a non-binary bisexual person who happens to regularly be accidentally visiting another dimension. (I’m not sure if they identify as bi, but they are attracted to men and women in the story.) I loved the idea of the story, and the writing was fantastic. I kept stopping to read things aloud to my partner. Like this: “I did know two people from college, and I ruined everything with both of them that same way, which was with sex and my personality.”

“The Queer Experiment” by Donna Ostrowsky: This was another great story, though I couldn’t actually see what the trans content was. In any case, it’s a great lesbian short story. Jennifer is an engineer at a university in the 1920s and, along with another professor and an assistant, is attempting to build a machine that will allow them to see the mystical world of the homosexual. It’s hilarious, even if it technically ends tragically (you know Jennifer ends up in an asylum from the first page.)

“Runaways” by Calvin Gimpelevich: “Runaways” actually has a trans man main character, but it is primarily focused on his best friend and her girlfriend. I loved all of their interactions, and the tension of Nike trying to decide whether to flee her relationship for a less responsible one (her girlfriend is currently trying to take care of her 10-year-old sister while their dad is in jail). The characters are so strong. (Also, Travis is Black and Nike is Filipino, so the story also touches on the intersections of cissexism/heterosexism and racism. Travis especially struggles with this.)

“Winning the Tiger” by Katherine Scott Nelson: This story is about a couple, both non-binary, dealing with being continually misgendered at a state fair. In the author’s bio, Nelson says that this story was once rejected from a mainstream publication for being “too aggressive”, which I think is teaser enough.

“Malediction and Pee Play” by Sherilyn Connelly: Yes, it’s as weird as the title suggests. The main character is technically in an open relationship with her girlfriend, Vash, but while she’s been striking out, Vash is getting closer and closer to her new partner. She attempts to get closer to Vash again, to try to get the sparks of their kinky relationship back, by helping her with a Satanic Black Mass production. But the despite the weird, the emotions at play are very relateable, no matter what your opinion on pee play. Or Satanism.

“Birthrights” by M. Robin Cook: The main character’s wife walks in on her dressed as a woman. Awkwardness ensues.

“Entries” by Riley Calais Harris: I’m not sure how to describe “Entries”. It reads almost like a condensed autobiography. She describes a radical activist who dumped her because she shaves her legs. The last line is “Oh, you know what? That’s probably why I shave my legs.” It’s not a very linear story, but I liked it. The ending is oddly uplifting.

I hope that this convinces you to pick up The Collection, even if you’ve never read any trans books before. It has great stories, a high quality of writing, and several lesbian stories! What more can you ask for?