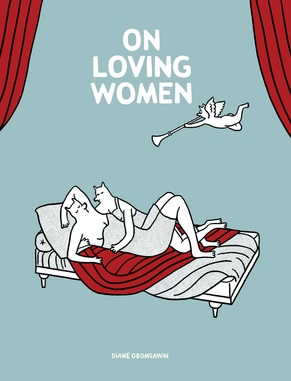 On Loving Women is a graphic novel made up of several short stories. The artwork is all done in the style of the cover: simple, clear illustrations depicting all the characters as animals. Each story is short, and most of them don’t have an arc. They are just snippets from their lives. Basically, although this collection doesn’t have any official framing device, they all seem to be answering a set of questions, dealing with, of course, loving women. These aren’t necessarily “coming out stories”, but they deal with the first loves, first kisses, and realizations about being queer.

The language in this book, like the illustrations, is simple and pared down. It reads to me like a group of queer women sitting around, trading anecdotes. They seem like a conversation. Coming out stories are still so essential to queer narratives, and to queer identities. They can easily become our defining stories. It becomes traditional to trade them, and despite the emotional weight attached to these questions (“When did you know? When did you come out? When was the first time…?”), by telling them so often, they become almost like small talk. On Loving Women reads like those honed answers to these questions. Like a story you’ve told quite a few times, so you’ve got it pared down to the essentials. And they’re simple, but powerful because of that. Because the practiced casual nature of telling these stories almost makes them more raw.

So this conversational nature explains why the stories don’t have a narrative arc. They are real life stories, and they are very small portions of people’s lives. These glimpses are fascinating, though, and they suggest a lot about the person telling them. A couple of stories do have a continuing theme within them, which adds to the story, but isn’t essential to enjoying them. Because the artwork is the same throughout (though different stories use different animals), the stories do run together, especially since the writing is similar, as well. There are differences between the characters, but they are all Obomsawin’s friend group, so they share similarities as well. I liked that there were stories about falling in love with a woman for the first time at four years old, and a few that took place much later in life.

I think this collection is almost impossible to not read in one sitting, but it would benefit from being read slowly. I highly recommend picking this one up.