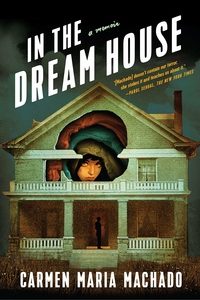 I have been simultaneously excited for and dreading reading In the Dream House since I first heard of its existence. I absolutely loved Her Body and Other Parties as well as Machado’s edition of Carmilla, so those put her books on my automatic must read list. This memoir, though, is about a same-sex emotionally abusive relationship: a subject I think needs to be discussed more, and is also something that gets under my skin. I knew that Machado would handle it incredibly–but I also knew that skill would carry the risk of reliving some painful moments in my own history. I was right on both counts.

Machado is an incredible writer. This is a book that experiments with the genre of memoir, explores the history of abuse between women (and its invisibility in the archive), includes a choose your own adventure section, and manages to make a recap of a Star Trek: The Next Generation episode a chilling counterpart to the main narrative. In the Dream House is divided into very short sections, usually between 1-3 pages. Each examines the “dream house” (where this relationship took place) from different angles: “The Dream House as Gothic Romance,” “The Dream House as Folk Lore,” “The Dream House as Famous Last Words.” Some are vignettes from her relationship. Some are academic essays on topics like 1940s Gothic Romance movies, or queer-coded villains. I found myself taking picture after picture on my phone of these short works, wanting to refer back to them.

Although this is not a book of theory by any means, Machado weaves in the academic so that it complements the story–and also makes me, for a second, want to be back in academia. Her explorations, regardless of the topic, are fascinating. Did you know that 1946 had the highest divorce rate in the U.S.? Do you know why? Throughout the book, there are footnotes referring to the Motif–Index of Folk-Literature, a book I was confident didn’t exist (Machado used a similar technique in Carmilla), but I see now is a real, 6 volume catalogue. For example, in “Dream House as Famous Last Words,” the woman in the dream house (she never gets a name), says “We can fuck, but we can’t fall in love.” The footnote that follows refers to “Omens in love affairs.”

Of course, this is a book about abuse. It follows their relationship from its cheery promise to nightmare reality. It’s not my experience, but it still felt like someone putting words to an experience I have never been able to properly voice. Machado explores the nature of abuse in queer relationships: the tangle of feelings about “lesbian utopias” being shattered, about violence and abuse as gender-coded, about feeling the need for both of you and your relationship to be positive representation. That by naming the abuse, you will only validate homophobic people’s views. “Years later, if I could say anything to her, I’d say, ‘For fuck’s sake, stop making us look bad.'”

For me, that really hit home. It made me think about the trap that queer people find themselves in an abusive relationship: the need to protect our abuser in order to protect the greater queer community/image. Also, the idea that our partner can’t possibly be abusive, because they are a victim. They are marginalized. In the victim/oppressor binary, someone can’t occupy both spaces, right? But I realized that it goes one step further than that, something that likely every person in an abusive relationship has felt: protecting the relationship in order to protect yourself. Because to show the abuse is to show that you were wrong. Misguided. That you misjudged the situation. You were foolish. Everyone else could see it, so how could you not? The more obvious the abuse, the more shameful it is to voice it or to attempt to escape. It’s an emotional sunk cost fallacy. Of course, this isn’t true. Victims of abuse should never be judged in this way. But it’s another way to keep people trapped.

Carmen Maria Machado is an incredible author, and I will continue to pick up anything that she ever writes. I highly recommend In the Dream House, but be prepared for an in-depth exploration of emotional abuse.