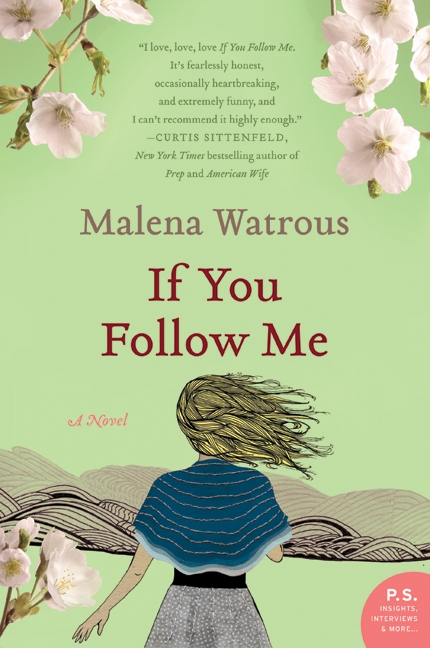 Maybe my expectations were too high for Malena Watrous’s first novel If You Follow Me.  I was pretty psyched about it from the get-go because it was about a bisexual English as a second language teacher who goes to Japan (just like me! well, except for the Japan part).  But overall I felt like this novel really didn’t make it off the ground, despite some of the things it had going for it.

So the main character Marina (read: slightly fictionalized version of the author—the physical description of her in the book even matches the author photo) goes to Japan because she doesn’t know what else to do with herself after she graduates from college; she basically follows her girlfriend there (uh, hence the name of the book).  She’s also just lost her dad to suicide, so she’s running from that as well.  The novel’s blurb describes the story as a “fish-out-of-water tale, a dark comedy of manners, and a strange kind of love story.” Honestly, I don’t feel like this book is any of those things.

I mean, it’s not funny, like, at all.  I don’t mean that necessarily as a bad thing, but it was weird to expect dark comedy and comedy of manners and get neither.  The love story (spoiler alert) with Marina’s supervisor Hiroshi could have been really cute, but it picks up too early in the book and then is mostly dropped again until the very end.  It was interesting to get a peek into Marina and her girlfriend Carolyn’s relationship at the period where this early twenties romance is losing its incentive but I wanted to be excited about the next romantic prospect and/or care about the disintegration of the first relationship.  Unfortunately neither happened for me.  You sort of got glimpses of what kind of person Hiroshi was, but not enough to really get on board with the romance.  This is too bad, because I think the book missed an opportunity to counteract that terrible “Asian men aren’t sexy” stereotype and give life to an interracial romance.  (Sidenote: if you’re looking for books that do a relationship between a white bi woman and an Asian man really well, check out Malinda Lo’s Adaptation and Inheritance).

As for the fish-out-of-water thing, If You Follow Me is basically a story about an American traveller whose antics are supposed to be endearing and funny but are just culturally insensitive, ignorant, and annoying.  I felt this way and I’ve never been to Japan and hardly know anything about it, so I can’t imagine how irritating it would be to someone who has or does.  I mean, how hard can it be to do some research and figure out how to sort your fucking garbage?  But anyway, I’ve dealt with idiotic American travellers, and their self-centredness is not cute, it’s gross and rude.  I just really couldn’t sympathize with Marina in this regard.

I don’t know: I guess I understand why this novel and the main character are so self-indulgent.  I mean, Marina is 22 and If You Follow Me is a first novel and so clearly about the author.  But understanding those things didn’t make me like it any more.  I’ll probably check out the next thing Watrous writes, because well-written fiction about bi characters is hard to come by, but with trepidation rather than enthusiasm.