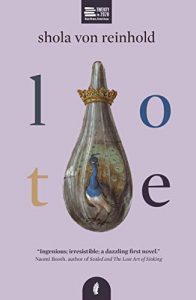 I first discovered the Bright Young Things at an exhibition of Cecile Beaton’s photography. His pictures capture the dazzling, decadent world of these young British socialites of the interwar period–their fabulous costume parties, heavy drinking, artistic flair, and taste for excess. After tearing through a number of biographies, my favourite figure became Stephen Tennant. He was–in the words of writer Lady Caroline Blackwood – “just an eccentric gay who didn’t really do anything”. What a magnificent way to be remembered!

The narrator of LOTE, Mathilda Adamarola, is also fascinated by Tennant and his friends. She experiences what she calls ‘Transfixions’–intense emotional and sensory connections to historical figures that can be strong enough to leave her in a giddy daze. Like Mathilda, most of these figures are queer and many are Black. In order to emulate her Transfixions, she has constantly reinvented her identity over the years in a series of ‘Escapes’, transforming into an ever-more dramatic version of herself. This isn’t without its problems–Mathilda explains that “People rarely allow for Blackness and caprice (be it in dress or deportment) to coexist without the designation of Madness”–and she’s certainly capricious. As a narrator, she’s wonderfully fun to spend time with.

While volunteering in the archives of the National Portrait Gallery, Mathilda is delighted to discover a new photograph of Stephen Tennant. But what is even more exciting is the young Black woman posing with him, dressed as an angel: a forgotten Scottish modernist poet called Hermia Drumm. Mathilda is immediately Transfixed and becomes determined to learn all about her.

After discovering that Hermia spent some time in a small European town, Mathilda applies to an artists’ residency there–winging the application and phone interview without knowing anything about the programme–and is soon travelling overseas to continue her detective work.

Mathilda’s fellow residents turn out to be fanatical adherents to Thought Art–an obscure strand of theory centered around minimalism, discipline and self-effacement. They are an almost unbearable contrast to the luxury-loving Mathilda. The residency is a brilliant satire of academic bullshit, with Mathilda forced to sit through mind-bogglingly dull, jargon-filled conversations about ‘Markation’ and ‘Dotage levels’. Von Reinhold’s send-up of predominantly posh, White institutions is one of the best features of the book.

While Mathilda assumes at first that there can be no connection between the residency’s austere academia and the vibrant Hermia, she soon finds something that did link them together: an enigmatic group known as LOTE. But what was LOTE? What happened to Hermia? How does it all link together? The questions become ever more tangled the more Mathilda learns.

Mysterious, decadent, and unapologetically flamboyant, LOTE is a dazzlingly good read. Behind all the champagne and cults, it’s also an intelligent interrogation of the politics of aesthetics, eurocentrism, and the presence/absence of Black figures in the artistic canon. It asks us: in a world that remembers Stephen Tennant, how many Hermia Drumms have disappeared into the archives?