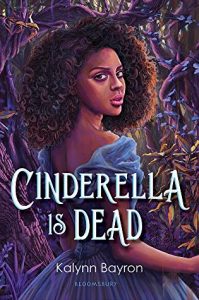 I was very excited to get ahold of this ebook, because I’ve been listening to a lot of YA audiobooks lately while doing other things, and so I’ve gotten on a fantasy YA kick. It’s great to read some exciting new releases and promote new books during a time when we all desperately need good distractions. Cinderella is Dead is not a re-telling of Cinderella, which is a trope that I do love but that I’m getting a tad bit weary of. Rather, it’s something I found even more exciting: imagining the consequences of a fairy tale after the tale, not just for the characters themselves, but generations down the line. Cinderella is Dead is perfect for those who want something more from the original Cinderella story.

The legend of Cinderella isn’t just a tale to the citizens of Lille. Rather, Cinderella was a real woman, and her legacy has grown and has been codified into the very law of the land. Every girl in the city must not only know the story by heart, but they are all commanded to dress up and attend a ball at the palace, just like Cinderella did. But rather than a romantic tradition, the events have been corrupted and used to control the citizenry by the corrupt monarchy. People pray to the spirit of Cinderella, not to wish for happiness, but to hope their daughters won’t be disappeared by the palace guard. Girls hope to find a suitor at the ball–but only because if they don’t they risk disappearing or being forced into menial labor. And they don’t get a choice about what man chooses them, or how he treats them after they get married. It’s truly a grim but intriguing imagining of how a beloved fairy tale could play out and be corrupted. CONTENT WARNINGS: this story deals with domestic violence, abuse, homophobia, human trafficking, and mentions of rape. The culture of Lille is dark, and its citizens who are not straight men go through a lot, which may seem like a lot in a book aimed at young adults, but what I find important is that our protagonists stand up to it, and meet and encourage other people to not accept these things as normal.

Enter Sophia, who harbors a forbidden love for her friend Erin, and a deep terror at being forced into a marriage where she will have no rights or say in her own life. Sophia refuses to accept the reality of Lille and wants to try to run away with Erin before the night of their own Ball when they’ll be trapped, but Erin can’t imagine taking such a risk and wants to do what is necessary to remain safe. The night of the Ball, Sophia is forced to flee by herself, and then she meets Constance, the last descendant of Cinderella’s Stepsisters. Confronted with new information about the true story of the Cinderella legend, and growing new feelings for a girl who is willing to fight by her side, Sophia has to decide how far she’s willing to go to create a better life for everyone in Lille.

It was really interesting to see not just the long-term effects of a fairy tale, but characters interacting with true events vs fictionalized versions. Over and over Sophia has to confront how the history she took as true but corrupted was actually propaganda from the start. And this book really took all the instantly recognizable elements of Cinderella–a blonde and beautiful Cinderella, glass slippers, the fairy godmother–and flipped them around while remaining firmly rooted in the original fairy tale.  The cover proclaims that Cinderella is Dead while Sophia stares out at us, Black, curly-haired, wearing the iconic blue Cinderella gown, but unabashedly, from page one, not interested in marrying a prince, and the story promptly drags us away from magicked pumpkins and mice and into witches, necromancy, and anti-royalist rebellion. In Lille, Cinderella was real, and her history was complicated, but her legacy is now Black, queer, and invested in taking down a tainted, misogynist monarchy.

I really enjoyed this book. It was a fun read, and the world-building and action picked up quickly. I really liked the slow peel-back of the Cinderella story, combined with how straightforward and brave Sophia and Constance were. [spoiler, highlight to read] I also really loved that Sophia had a first love, but then slowly realized she was more compatible with Constance. [end spoilers] The twists and turns managed to surprise me and keep me involved. It’s just a really good read, and we need more like it on the shelves, especially for young readers today.