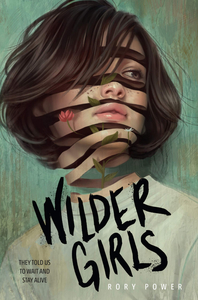 The things I heard about Wilder Girls before I picked it up:

And needless to say, I was sold. If the ethereal and captivatingly disturbing cover weren’t enough, these tidbits promised something dark and twisted that appealed to my love of the grotesque and monstrous girls in love.

Wilder Girls centres on the students of Raxter, an all-girls boarding school on an island off the coast of Maine. The school has been quarantined after an outbreak of an untraceable disease called the Tox, which manifests itself in different ways for whoever contracts it: second spines bursting through the skin, scales growing over limbs, unhealed blisters and sores which ooze and bleed without relief. In the worst cases, the Tox turns the girls feral and violent, forcing their peers to put them down like animals. The core trio of girls are Hetty, Byatt, and Reese, close-knit friends who distance themselves from the others for their own protection. Hetty is connected to Byatt like a sister, and secretly yearns for something more with Reese, which is threatened when Hetty is put on the team which collects the shipments of supplies and rations from the mainland, and becomes privy to some dark truths.

In reading Wilder Girls, I was consistently reminded of the movie Annihilation–yes, that one with Gina Rodriguez with an undercut, a tank top, and a big gun. The blending of nature and bodies, the twisted manifestations of the Tox, reminded me a lot of the visuals in the film. There are also mutant animals which threaten the girls’ lives; there is a particularly memorable scene with a disfigured bear which is a little too reminiscent of the scene from Annihilation. However, the similarities weren’t a problem for me. I loved the film and its aesthetic, especially the way it presented twisted depictions of bodies and a rawness in all its women. After watching it, I definitely wanted more. Wilder Girls gave it to me. Rory Power’s descriptions are evocative and visceral, creating that same rawness which worked so well for me in the film. Maybe these similarities are subjective, but I do think it’s a worthy comparison, especially if you were a fan of the movie. I may have to pick up the book by Jeff VanderMeer to see if the similarities are that concrete.

There are obvious differences, too. The relationships between Byatt, Hetty, and Reese are a major drawcard; they are strong and complicated, and the girls are all sharp in their own ways, making for compelling reading. The attraction between Hetty and Reese isn’t soft by any means: it’s a rough sort of yearning, with a desperation that I feel we don’t normally see in YA. It, like the rest of the book, is dark–and it’s deliciously appealing.

The ultimate answer of what the Tox is, and the involvement of a navy research base, did seem a bit rushed to me, and left me with more questions than answers. If you are looking for a book which neatly ties everything up and reveals the entire mystery to you, then this is perhaps not a good choice. But I did enjoy that as more plot points at revealed, the conspiracy deepens and the desperation heightens. One thing that can definitely be said about the characters is that none of them are perfect, and none of them are selfless. In fact, they are all selfish in their own ways, and it makes for some realistic and believable reading.

Wilder Girls, for me, is a highly recommended read. It is a violent representation of girlhood of a kind that is rare in fiction, and deserves to be celebrated. It helps that the characters are well realised and have depth, and the whole thing is grounded in female friendship. It is also served well by Power’s frank and unrelenting prose. This is a book which I feel can tempt even people who don’t usually read YA–fans of horror in general should find something to like. I for one am definitely looking forward to reading more of Power’s work in the future.