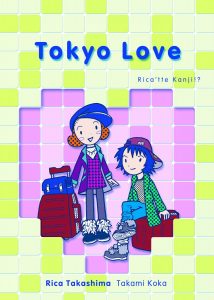 Trigger warning for some transphobia

In Tokyo Love, Rica Takashima explores a semi-autobiographical story of recently-out college-age lesbian, and what it was like to be queer in Tokyo in the 1990s before dating apps and online LGBTQ communities became more commonplace. This book is an omnibus of a serial manga she created originally for the lesbian magazine Anise(now defunct), and includes later chapters published after Anise was discontinued.

Tokyo Love follows a young woman named Rica (not to be confused with the author) after she first comes to Tokyo for college and ventures into Shinjuku Ni-choume, Tokyo’s gay district. Rica is adorably naïve and genuine and full of enthusiastic curiosity. She quickly meets an art student named Miho, and through the rest of the manga, Miho is her Ni-choume guide, and eventual girlfriend. Focusing primarily on their relationship, Tokyo Love showcases Japanese lesbian experiences in short episodic doses.

All and all, I found this book to be cute and fun. Some of the best parts of this book are in some of the earliest chapters where readers learn along with Rica about Ni-choume and Japanese lesbian bar culture. Although I live in Japan, I don’t particularly enjoy bars and haven’t gotten up my introvert courage to visit Ni-choume. This manga was fascinating, and I loved enjoying it from the quiet of my own apartment.

Although this is not necessarily a “coming out” story, over the course of the manga, Rica experiences many “firsts” of her lesbian experience, allowing the narrative to explore different topics like bar culture, having sex for the first time, her first girlfriend, and discovering LGBTQ community. Despite all these first experiences, Rica is already sure and established in her sexuality and attraction to women, and there isn’t any of the coming out drama that might otherwise be included.

Chapters are also included which show Rica and Miho’s respective childhoods and first feelings of attraction towards other girls, which is a nice addition.

My only major criticism of Tokyo Love is the depiction of a trans woman in one of the chapters. Rica meets a woman at a college mixer, and they agree to go on a date. However, when Rica suggests they end the night at a women-only bar, her date declines, fearing that she hasn’t “perfected her female body” enough to go inside. After realizing that her date is assigned male at birth, Rica responds in a thought bubble, “You’re a man!” It’s played off as very lighthearted and comical, and Rica’s date doesn’t seem upset in the least, but it was a rather jarring experience for me as the reader.  While not stated outright, this seems to end the potential for another date, and the character is never mentioned again.  It was a very disappointing scene, in an otherwise good manga. And although there isn’t anything offensive in the rest of the book, this chapter might have been enough for me to think poorly of it as a whole.

Despite being left with a sour taste in my mouth from that chapter, the rest of the manga was mostly enjoyable. The art is cute, and although the story became a bit dull for me at a certain point, I still enjoyed it for what it was, and read it until the end. If you are curious about the experience of being a lesbian in Japan in the 90s, you might consider this one.

If you’d like to read Tokyo Love, the publisher has made it free online, and you can read it and download it as a PDF: http://www.yuricon.com/yuriconalc/RTKO/files/inc/1218031951.pdf You can also purchase a Kindle edition on Amazon, but I don’t recommend it, because the text is sometimes too small or blurry to read, but is clear on the PDF!