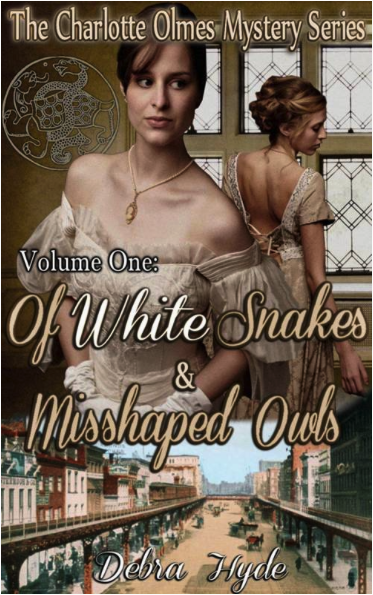 Miss Charlotte Olmes is the classic turn of the century ‘woman detective’ – clever, enlightened, and progressive, with a penchant for cross-dressing. She lives with her companion and partner Joanna Wilson, who appears slightly more respectable – but I mean, they’re a live-in lesbian couple in 1880s New York, so respectability is somewhat relative here.

After a morning spent instructing a society lady and her maids in parasol self defence, Charlotte and Joanna’s services are engaged by the lovely Miss Tam, whose employer has gone missing. Their investigation takes the reader on a rather enjoyable tour of period New York, complete with violent street gangs and Chinese/Irish racial politics. It’s evident that Hyde did some research on her setting; I particularly liked the ladies’ trip to the morgue and police station.

White Snakes is the first novella in the Charlotte Olmes series. At 73 pages, it’s short and sweet; a quick, light read. Hyde’s writing is fun and fairly well crafted, and her language did an excellent job of conveying place – although, while I appreciated the inclusion of appropriate slang, it did lessen my engagement because I had absolutely no idea what it meant.

I didn’t enjoy it so much as a mystery; while the majority of the ‘clues’ were laid out for the reader, the necessary context was not quite so clear, which left me kind of detached from the mystery storyline – in my mind, the best kind of mystery is where the reader can guess the killer or the criminal or whatever, but only if they read carefully/cleverly. While I can kind of see the enjoyment of only being ‘along for the ride’ – as if you were Hastings in an Agatha Christie, perhaps – it just doesn’t do it for me. It was written with split perspectives between the killer and Joanna, which was fine; I personally would have preferred it to be all Charlotte and Joanna all the time, partially because it’s so short, but it did work, and I did enjoy a couple of the not-ladies scenes.

I loved the dynamic of Charlotte and Joanna’s relationship – it rather reminded me of the Amelia Peabody series, just with wlw and BDSM. They were sweet together, with a good working relationship, and great chemistry. I really liked that Joanna was the narrator; Hyde did a really excellent job of establishing them as equals. It would have been very easy to write them as one fully dominant and one fully submissive, but despite the shortness of the book, Hyde neatly sidesteps that cliché and, in doing so, created much more three-dimensional characters. I wasn’t super into the whole language of exoticism and orientalism that accompanied the Chinese characters, an unfortunate and fairly common convention in period mysteries; it wasn’t the worst, but it did detract from my overall enjoyment. Ditto with the pity-attitude towards sex workers – obviously historically women haven’t always had a lot of choice with regards to this, but that doesn’t need to translate to a disrespect of sex work.

I’d love to see it fleshed out into a full book. I wanted to spend more time with Charlotte and Joanna – particularly in the space where they’re just Charlotte-and-Joanna, not Lady-Detective-Charlotte-and-Companion-Joanna or Charlotte-and-Joanna-having-hot-sex. Those sides of their relationship are both well done, but I’d liked to have seen equal time between the three to fully explore all the versions of themselves that they are with each other.

Overall; fun and too short. I’ll probably read the other books in the series if I can get my hands on them, and I’d like to check out some of Hyde’s longer works. According to the bio in my edition, ‘all of her work is available in ebook, and her short story backlist is about to be republished in a mini-anthology format with Sizzler Editions’. So if you read and enjoy this, you might want to check that out!

Trigger warnings for descriptions of violence and a (not very graphic) murder.