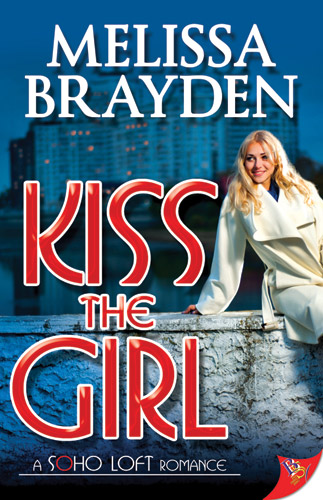 Kiss the Girl is Melissa Brayden’s fourth book, after How Sweet It Is, and contains similar strands of enduring friendship and sweetness mixed with serious themes.

Brooklyn Campbell co-founded a small but successful advertising agency with her three lesbian best friends from college. She’s a fast-driving, energetic whirlwind who follows one rule: never get too involved. Jessica Lennox is a quintessential high-powered advertising executive who spends all her time thinking about work. The two women meet by chance and feel an immediate spark of attraction, then discover that their companies are rivals for a coveted account and will be forced to work on the same campaign until one is chosen.

Initially, both women agree that any potential relationship between them is impossible considering the potential breach of professionalism it would entail. Brooklyn, who grew up in and aged out of the foster system, also battles confusion after she’s told that her birth mother wants to get in touch for the first time. Events conspire to throw Brooklyn and Jessica together several times, forcing them to realize that it might just be worthwhile to take a chance on a real relationship. Brayden supports their story with a full cast of supporting characters.

Overall, I recommend this book for fans of initially adversarial romantic relationships and corporate intrigue. Brooklyn’s reasons for not committing to Jessica felt valid, given her emotional background. A side plot with Jessica and a neighbor’s daughter ended up feeling a little unresolved, and I was left wanting to know more about the lives of Brooklyn’s friends. Maybe Brayden will write a book for each of them? I can only hope that’s true, given the “A Soho Loft Romance” tagline.

I received an advance copy of Kiss the Girl, which comes out this month, through Netgalley. For another tale featuring a corporate lesbian powerhouse, try The Blush Factor by Gun Brooke.