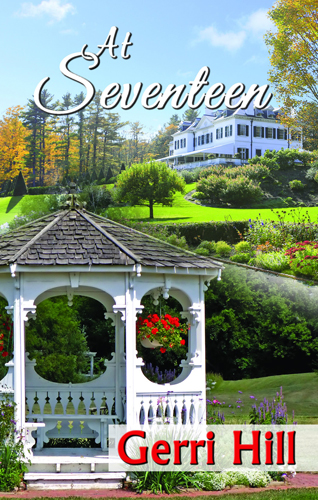 I’m not sure exactly how it happened, but I established a habit of purchasing and reading every Gerri Hill book as it’s released. I tend to like her generic romances more than those with thriller elements, but I foresee myself reading her new books until I am seriously disappointed by something she writes. The curse and benefit of this extensive knowledge of Hill’s back catalog is that I can compare the books to each other, and At Seventeen (released July 2013) explores some familiar narrative territory.

When she was ten, Shannon Fletcher moved into Brook Hill’s finest house–the Lansford mansion, where her mother worked as a maid and cook. The elder Lansfords were wealthy and distant, but their daughter Madison became Shannon’s clandestine friend. Over time, their friendship grew into love, and Shannon and Madison spent every moment they could together before high school ended. Even though Shannon knew that Madison was destined to take up her rich girl mantle and someday marry a rich boy, she threw her heart into their relationship and has never quite recovered from its end.

Fast-forward twenty years, and Shannon is planning to move back to Brook Hill. She and her older brother own a chain of fresh markets and are looking to build a new store, and their retired mother has been struggling with illness. Shannon’s run-ins with Madison over the years since their split have been painful and unsatisfying, leading her to avoid Brook Hill as much as possible. But now that she’s moving home, Shannon knows that she probably can’t keep avoiding the past.

For her part, Madison is unhappy with her marriage, although she has a precocious son, Ashton, who is heading off to college at the age of fifteen. Her mother hand-selected her husband and her house, and still picks out her clothes, and although she is thirty-seven, Madison feels so unfulfilled that she allows her mother’s interference to continue. But with Ashton leaving home and Shannon returning to Brook Hill, Madison feels like it might finally be time to take control of her own choices. Even if she and Shannon can only be friends.

And of course they aren’t just going to be friends.

The backstory of the young love between the girls is revealed in a series of flashbacks as Shannon tells her friends of six years’ standing all the reasons she’s been avoiding Brook Hill. I appreciated that we got the “history” portion of the narrative out of the way quickly, but the frame story was clunky and left me wondering why Shannon claimed to be friends with these people when she hadn’t really told them anything about her life. I guess it could be an illustration of how she hasn’t really been living since Madison left for college, but it still seemed awkward, especially when those characters were reinserted later in the story to cause some drama. The other problem is that it means the reader’s view of the past is all from Shannon’s perspective.

After Shannon’s return to Brook Hill, the story’s perspective alternates between Madison and Shannon, and things proceed as you might expect–they try to be friends, Madison has difficulty with her old money family, particularly her mother, about leaving her husband, etc. There’s a feeling of inevitability about the resumption of their relationship, and not just because this is a romance. Everyone in both main characters’ lives that actually cares about them sits them down at some point and says “I know you were in love with her then and you’re still in love with her now.” It’s not clear to me why it took the twenty years for Shannon’s mother (who loves and cares for both Shannon and Madison, who became close to her in Shannon’s long absences) to talk to her daughter about her obvious emotional pain. And why on earth would Shannon spent twenty years pining for someone without even the wherewithal to pick her own clothing? Why wouldn’t she at least tell her mother she was gay at some point? I ended this book with too many “why” moments.

I purchase Hill’s books to easily re-read them when I have a few hours, but I’m not sure that I’ll be picking up At Seventeen again. Not only is there a serious Winger earworm to contend with every time I so much as glance at the cover, but I prefer Behind the Pine Curtain (2006) as a story of young love revisited, or even Love Waits (2010). I don’t mind going over the same ground again–what dedicated romance reader would?–but the structure of the story, and Shannon and Madison’s sometimes perplexing choices, put me off.