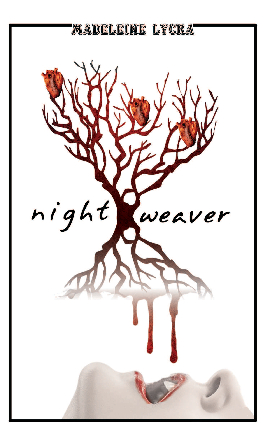 Like many independently published novels, Night Weaver is unpolished: it contains typos, a few confusing scene breaks, and at least one extraneous sex scene. Additionally, while the ending is satisfying in terms of content and loose ends, it feels abrupt and like it ought to have been fleshed out more. Despite these issues, I enjoyed reading Night Weaver. The story and characters are strong and well developed, and the characters’ internal universes—Ankit’s and Arrow’s both center around making art—are interesting to explore. The erotic scenes are also fun to read. Isabel, Ankit, and Arrow, the three vampire women, form a love triangle: Isabel and Ankit were together for a long time, but no longer, and Ankit and Arrow begin to fall in love, which enrages Isabel, who also happens to be queen of the vampires. Ankit is a painter and tattoo artist, and Arrow weaves tapestries; they are drawn together by their similar artist souls.

For vampire lore connoisseurs: these vampires have limited qualms when it comes to feeding on the blood of living humans. The protagonists in Night Weaver often kill to eat and rarely feel guilt over these actions. The origin of vampires is not explored in this setting, and some of the typical lore is ignored. These are nocturnal vampires who will burn in the sun, and can be killed only by sunlight or very violent physical trauma. We see Arrow work on one or two occasions to control her “beast,” but the vampires in Night Weaver are generally in control of themselves, and the only drawbacks to immortality seem to be night living, loss of human food, and occasionally deadly politics.