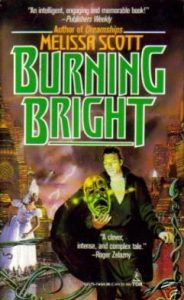 Burning Bright is a story about power struggle set in a science-fiction universe in which two different races co-exist – the Human and the Hsai – but are battling for power. Burning Bright is the name of the planet in which pilot Quinn Lioe docks her ship for repairs which makes her spend a few days on the planet. This planet is an important commercial link between the Human Republic and the Hsai Empire, but it is also a centre of activity for the Game. Lioe is a designer of scenarios for this Game and is aiming to spend her few days on the planet to launch her newest one. However her interest in the Game soon involves her in the power struggle that is happening between Humans and Hsai.

The plot of the novel is complex and the author takes the time to settle the characters, the places, and the plots. At the beginning we feel all the characters are connected via one another but we can’t quite see how they are all going to move towards the same point. The novel being science-fiction the author has to explain to the reader all the aspects of the world she creates and Melissa Scott does it very well. All the explanations come from the thoughts and actions of the characters and nothing feels forced on the reader. We gather all the information we need from the characters at the same time than the plots moves forward. Nothing ever feels unnecessary and we dive easily into the world created by Melissa Scott. We slowly discover the game of power and the role of the different characters and as we turn the pages everything falls into its right place making the picture clear for the reader. It is a very gripping book. Once you start reading it you want to know more, you want to discover who’s who and who does what and why. This is another strong point of the novel: its characters. All the main characters are fully developed and have complex personalities. They are not black and white with a single motivation to do good or evil. They are shades of grey, with a past that has modelled them towards a future they are trying to build for themselves. Some of the characters become caught in the plot without wanting to and Melissa Scott transcribes very well their reactions and feelings.

So far I haven’t talked about why I picked this novel to review for The Lesbrary. In the author’s world, the characters have fluid sexuality. It’s not something that is questioned or even important, they just sometimes fall in love with men or with women and it’s just the same. In regards to The Lesbrary, the pilot Quinn Lioe has an affair with the docker and gamer Roscha. I liked the reality of their story which begins as a one night stand but evolves into something more complicated as the story goes on. I especially liked the subtle treatment given to it by the author which made their story feels very real. The only point I didn’t understand well was their love scene. It’s not that it was badly written but it felt unnecessary. Every scene of the novel brings information to the reader about the world, the plot, or the characters but this scene didn’t bring any useful information at all. I think the scene could have been cut and the story wouldn’t have suffered for it. But that’s really my only negative point about the book.

In her novel Melissa Scott succeeds in creating very interesting and deep characters as well as a very intriguing plot, in a rich and complex setting, that goes at a pace that keeps the reader hooked to her words. This is a very good read and I would highly recommend it.