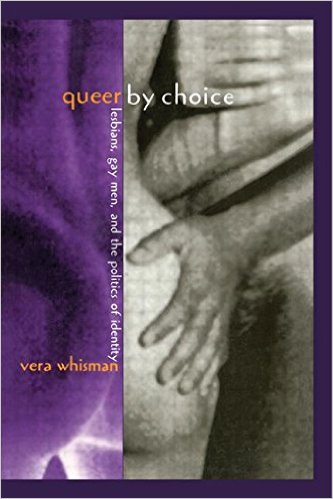 One of my favourite books is Dear John, I Love Jane: Women Write About Leaving Men for Women edited by Candace Walsh and Laura André. There are some beautifully-written essays in the collection, but what really grabbed me were all the narratives that didn’t match the classic queer storyline: I knew since I was a kid, and it’s always been the same (though I might not have always known it and accepted it). My desire has been a constant in my life. I took that narrative for granted, even though it didn’t match my experiences, and it was only when reading Dear John, I Love Jane that I realized that there are many people who didn’t experience attraction or romantic love in that same way. Sexual fluidity exists! So when I saw the title of Queer by Choice, I was excited to revisit that. I wanted to read about people whose queer identities didn’t match the mainstream story, including those who did feel like they had a choice in being queer.

Queer By Choice was written as a doctoral dissertation, and it reads like one. The book is based around a series of interviews of gay and lesbian people centered around the role of choice in their sexual identities. The main conclusion Whisman draws is that despite the “born this way” party line, most people identify their sexuality as not entirely chosen or determined, but as a mix. Primarily, most people she interviewed saw their orientation as determined and out of their control, but that they demonstrated choice in how they dealt with this orientation, how and when they came out, and how they acted on their desire.

For being written 20 years ago, Queer By Choice was more inclusive than I was expecting. It recognizes the role of race in identity narratives, and acknowledges the lack of bisexual participants. It also critiques the “gay ethnicity” model as racist. Unfortunately, its discussion of trans people is awkward, expressing surprise that a lesbian would still consider herself a lesbian while in a relationship with a “pre-op” trans woman.

My main complaint with this book is that I was most interested in hearing from people who do see their sexuality as a choice, because that is not something that gets a lot of attention in the queer community. Despite the title, the vast majority of this book discusses people who do not see their sexuality as a choice. The bits that do are interesting, including a section that explains that earlier in the queer rights movement, there had been a push to “free the homosexual in everyone”, and that the biological minority model “fails to interrogate the inevitability of heterosexuality”: it posits the hetero/homo (or generously, hetero/bi/homo) as natural instead of seeing queer rights as freeing all people to explore the possibility of their sexuality. Another point that I found interesting was when Whisman argued that because women are taught to contain their sexuality, the “choice” narrative is more appealing to them, while men are taught that their sexuality is an uncontrollable force, making the “determined” narrative more intuitive.

While there were some interesting points contained in Queer By Choice, the bulk of the book discusses some variation of the “born this way” narrative, which I didn’t find interesting. It also got repetitive, both in the sense of reiterating thesis points over and over, and in the repetition of quotes in different chapters. Although this is a short book, it felt padded. This is definitely a topic I’d like to read more about, but I wouldn’t highly recommend this particular title.