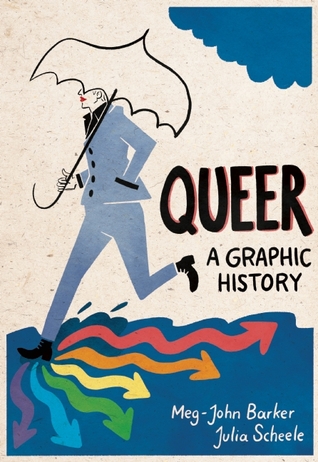 When I picked up Queer: A Graphic History, I was expecting a pretty short, easy read. Queer history! In a graphic format! I was surprised, then, to realize that this is not just queer history as in LGBTQ history, but queer as in queer theory, which is a whole different ball game.

I took queer theory in university years ago, and I had a complicated relationship with it (appropriately). Most of the time I felt like I was totally over my head, but I actually did okay in the course. I also found a lot of the ideas intellectually stimulating, but I felt like they had little use in the real world. I was especially annoyed at how little queer theory seemed to have to do with queer people. Especially when my teacher scoffed at people identifying as queer, because queer as defined in queer theory is not something you could ever achieve, at least not all of the time.

So this ended up being much better and more interesting than the book I thought I was picking up would have been. It served as a refresher for some of the concepts I’d been introduced to years ago, but it also brought up a lot of ideas I hadn’t heard about. Although sometimes it got a little intimidating, I think overall it did a great job in introducing a very dense, complex, sometimes incomprehensible subject.

I also found that a lot of the discussions at the heart of queer theory resonate with me a lot more than they did years ago. This book talked about the dangers of identity politics, and how many possibilities open up when we discuss queer/LGBTQ issues as things people do, instead of what people fundamentally are. This emphasis on actions, and on not limiting people in categories seemed a whole lot more literal and relevant as someone who recently had to change how I identify after experiencing sexual fluidity.

This is just an introduction to queer theory and queer studies, so a lot of things are just touched on (like asexuality and crip studies), but I think it managed to be pretty thorough for the restrictions. It also addresses some of the criticisms of queer theory, especially its failure to incorporate race and other intersectionality.

I wish this had been around when I was first learning about queer theory and felt completely lost! This is a great introduction. If you’re at all interested in queer theory, especially if other texts have seemed intimidating, this is a great one to pick up! I think other queer theory texts will seem much more comprehensible once you’ve gotten the basics from Queer: A Graphic History.

If you like what we do here at the Lesbrary, support us on Patreon for $2 or more a month and be entered into monthly book giveaways!  Or buy us a coffee on ko-fi if you’re generous!