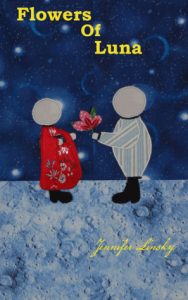 My recs pitch for this book is: fashion college on the moon, with femme on femme Asian diaspora lesbian romance. Yes, I said on the moon.

Flowers of Luna, by biracial Japanese-American author Jennifer Linsky, has a very familiar structure and feel if you’ve been reading a lot of young adult and new adult contemporary f/f. Ran has just started college in fashion design, and the story is mainly about how she falls for a sexy, adventurous engineering student. Hana shows her a great time on the weekends but holds back a little too much of herself otherwise, which eventually causes problems. There are plenty of B-plots about group projects with Ran’s classmates, creating new clothing designs, and in staying in touch with her sister at another school far away.

Except, this one takes place on the freaking moon. So there’s an extra layer of fun and sparkle on top of the familiarity. The main character is biracial, and fairly in touch with her Japanese roots thanks to the moon’s culture having a lot of Japanese influence as a result of some postapocalyptic stuff that happened in Japan, driving everyone to seek homes elsewhere. She’s also a second-generation lesbian (or “mirror-biased”, in the slang of this imagined future; bisexual is “parallel-biased”) raised by two moms on a mining ship. Her parents were big heroes in some kind of major event that happened when she was too little to be involved, so she’s a little bit celebrity-adjacent and every once in a while it influences her interactions with the world and with strangers/new people.

But she’s on the moon to study fashion design, and on the moon you can socially get away with wearing clothing from different time periods or cultures to suit your whim, PLUS machines replicate whatever you design, so there’s basically no limit to what she can invent. (She does like doing some hand work, if she has the time for it.)

Hana, who Ran meets as a result of some weird posturing and playacting involving an insult in cosplay and the subsequent duel, is a Japanese diaspora engineering student who has to play it drab during the week so her being a cute lesbian doesn’t make her male classmates not take her seriously. But on the weekend, with Ran, she’s pretty sexually adventurous–for example, there’s a running gag about her not wearing underwear, even in public.

It’s hard to maintain true intimacy when one of you is holding back, so that’s the main conflict of the book, and there was a point in my reading where I kind of expected them to stay broken up and the MC to wind up with the nonbinary character she’d flirted with near the beginning. But the book’s main couple do work things out. I think I just wanted to be more convinced. Ran does acknowledge in the postlude that she has no idea what the future holds, but they’re enjoying themselves right now.

The moon environment itself is a very appealing place to spend your imaginary time, as a reader. There are cities, mostly Japanese and Russian influenced, with fake day and night, where you can visit cozy restaurants carpeted in tatami mats and floor cushions. “Shoes,” Hana reminds Ran. “The Moon is not a foreign country.” After the Japanese dinner they pop into Mr. Chung’s ice cream shop, where he does his best to balance heat and coolness with flavors like curry ice cream. “You must be careful to avoid an excess of yin; we live on the moon!”

I want to specifically note that I initially overlooked this book because I thought, from the sample, that it was a different type of book, much weightier (the sample is from the insult scene in the beginning and I didn’t realize that was only cosplay playacting.) Had I known it was “lesbian college fluff on the moon”, I would have picked it up a lot sooner. Also, for a book that truly and thoroughly celebrates visual beauty, both of clothing and of women’s glorious, exquisite bodies, I think it would be better served by a different cover — just one woman’s opinion, of course!

In summary, Flowers of Luna is remarkably contemporary-feeling for sci-fi, a good gateway for SFF-intimidated f/f fans especially because the conflicts aren’t SFF-specific, while also including enough cool details to keep sci-fi fans happy.

Thank you for taking the time to read my review! I write more of them at http://shiraglassman.wordpress.com and on Goodreads, or check out my latest book, The Olive Conspiracy, Jewish fantasy about a young lesbian queen who must work together with her found-family, including her wife, a dragon, a witch, and a warrior woman, to save their country from an international sabotage plot.