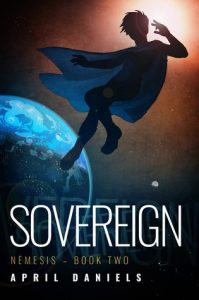 This is my favourite superhero story I’ve ever read. I really enjoyed Dreadnought, the first book in the series, so I was equally excited and hesitant to start the sequel. To be honest, I was worried it wouldn’t live up to the first one. Dreadnought was great in a lot of ways, but it did have some rough-around-the-edges elements, and I wasn’t sure it could maintain a whole series. I was glad to be proven wrong–in fact, I ended up enjoying Sovereign even more. (Mild spoilers for the first book from here on.)

Dreadnought dealt heavily with transmisogyny and Danny’s abusive home life. Those elements are still present in Sovereign, but not to the same extent. She’s not living with her family now and is trying to be emancipated. She’s built a support system. Instead, she’s dealing with the fallout of what she’s been through. What happens when you take an abused teenager, give her superpowers, and then reward her for beating people up? I love the way this series explores the crunchy, interesting questions of what being a superhero would actually be like, including the internal politics of the superhero community, the power imbalance between superpowered humans and everyone else, and the complex relationship between superheros and police. The background struggles are a little more subtle, which drew me in and made me think more about the invisible underpinnings of other superhero stories.

Of course, it doesn’t hurt that this volume also has a F/F romance! Danielle is a lesbian, and her love interest is a bisexual amputee Latina vigilante. I was rooting for them in the first book, so I was definitely happy to have my ship sail. I love their dynamic. They both respect each other as people and as superheros, and they challenge each other to be better. (In terms of representation, there’s also a genderqueer side character who has they/them pronouns!)

This is all, of course, not beginning to mention the actual plot of the book. I’m not well-read in superhero stories (comics or prose), but I was surprised by how captivated I was by the superhero vs supervillain plots of both books. These are gruesome, brutal fights that drag Danny through the mud and to the brink of endurance. Sovereign also includes torture. This story does not shrink away from the level of violence that is both inflicted and endured. I found the overarching plot fascinating, and I’m really hoping that there are more sequels to come, because I’m confident that this world and this writer can support them.