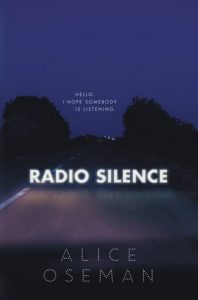 There’s a certain kind of book that I find really hard to read. It’s when it has this tone–this disaffected, aimless melancholy. Radio Silence definitely has that underlying sadness, and combined with it being a 400 page book, this wasn’t the quickest read for me, but it was definitely worth it.

Radio Silence is a YA novel about Frances, who has concentrated all of her energy and attention on two things in life: getting into Cambridge, and being a fan of Universe City. Universe City is a podcast with a striking similarity to Welcome To Night Vale. When she finds out that the creator of Universe City is someone she knows, the two immediately bond over their shared interests.

I loved the focus on friendships as important, life-changing relationships. As Frances and Aled grow closer, she makes sure to clarify that “You probably think that Aled Last and I are going to fall in love or something. Since he is a boy and I am a girl. I just wanted to say—we don’t.” That doesn’t stop them from having an intense relationship, though. They connect in a way that they haven’t with other people, and they can help and hurt each other just as much as if they were in a romantic relationship.

As I said, there is a bleak atmosphere through most of the novel. Frances has built her life around her academic career, and hasn’t stopped to consider whether she actually wants what she’s been working towards. Aled is in a smiliar spot, except that he has been pressured into it by his abusive mother. (Extremely emotionally abusive–trigger warning for abuse and pet death.)

There are a lot of different relationships at play here: Aled’s estranged sister (who yelled at Frances when she tried to kiss her and then disappeared), Aled’s mother, and also his friend Daniel.

I’m not sure how to talk about this book without spoiling it, because the ending is really what made it for me. It was worth pushing through the sadness to that bit of light at the end. It shows that there is an escape from that dread that seems all-consuming. It might not mean stepping out into beams of sunlight, but there are stars in the darkness.

There is, of course, a lot of great representation as well. Frances is biracial and bisexual, and there are also gay and demisexual characters.

If you like Welcome To Night Vale, love/hate tumblr, or have a complicated relationship with universities as institutions, definitely check this one out.