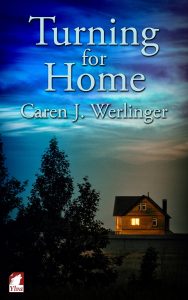 It’s hard to summarize the plot of Turning for Home, chiefly because it’s kind of a hodgepodge of happenings without much tying them together beyond the fact that they are centered around a single main character – but I will try. *spoilers ahead, throughout this whole review*

Jules returns to the small Ohio town in which she grew up with her grandparents for her grandfather’s funeral. While there, a local lesbian teen writes her a note asking for her help as she comes to terms with her sexuality in this unsympathetic environment. After the funeral, Jules comes home to her partner Kelli, who feels like Jules is pulling away from her, as she did in her past relationships. Meanwhile, Jules engages in an odd flirtation with a fellow educator, while also counseling Ronnie, the teen from her hometown–and simultaneously hiding all of this from Kelli. Also, Kelli’s mother is diagnosed with pancreatic cancer, as if all the rest weren’t enough drama. Throughout it all there are flashbacks to Jules’ childhood–her experiences with her strict grandmother and loving grandfather, who raised her after her mother left her with them, and her friendship with a neighbor boy that ended his tragic death, for which she blames herself, and whose ensuing emotions she has totally repressed well into adulthood. Needless to say, there is a lot going on. All of which is resolved by the end of the novel, in ways that don’t necessarily satisfy–or even make sense (for example, Ronnie is kicked out by her family because of her sexuality and ends up moving in with the mother of Jules’s dead childhood friend… which just seems weird to me).

Unfortunately, I was just not a fan of Turning for Home: the plot was way too busy, and, conversely, most of the characters didn’t really have well-developed personalities, beyond the fact that all manner of things kept happening to them, making it difficult to connect and sympathize with them. There are so many miscellaneous plot points thrown at the reader: drama with Jules’s past and with her present, drama with Kelli’s family, drama with Ronnie, drama with their friend Donna (who is also Jules’s ex) and her relationship–but ultimately I couldn’t bring myself to care about very much of it. The characters felt flat: Kelli doesn’t have much of a personality beyond loving Jules (even though Jules doesn’t seem to do much to deserve it), and Jules doesn’t have much of a personality beyond having a tragic past and being a jerk to Kelli because she is incapable of working through her own emotional issues (despite the fact that she is a school psychologist!). Right up until the end of the book, Jules is making decisions that just plain don’t make sense, and Kelly is hand-holding her through the process of being a mature adult who owns up to their emotions and decisions. It’s convoluted and not particularly engaging for the reader.

Turning for Home just wasn’t for me–but if the plotlines I’ve described sound appealing to you, go ahead and give it a try. I’m going to stick with other works by Caren J. Werlinger, like Cast Me Gently, which I very much enjoyed–it read like Annie on My Mind for grown-ups, thanks to its 1980s aesthetic and gently lovable characters.