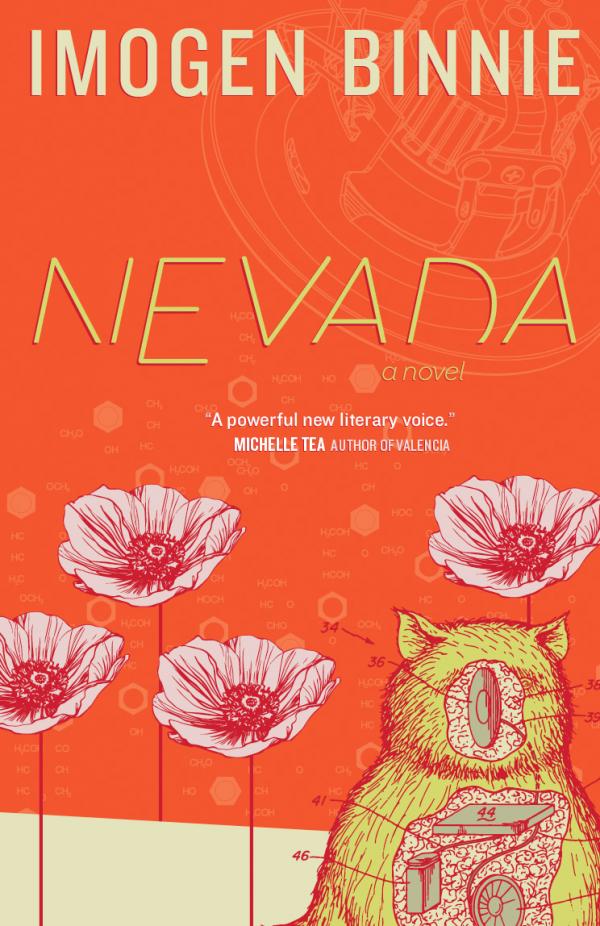 Nevada is one of the books that I’ve been most excited to read lately. It’s pretty much the first trans lesbian novel I’ve heard of, I like the (weird) cover, the blurb sounding promising, and it’s by a publisher I already like! That’s a lot of positive points! So I was also a little bit nervous about actually reading it, in case I ended up being disappointed. Luckily, from the first page, I already liked the writing style. Here’s the first two paragraphs (warning for S/M, choking):

She’s choking me. She’s really in there, fingers mashing my trachea, and I can’t breathe, Maria thinks.

It occurs to her that she truly can’t breathe–but she can’t bring herself to care. There was a time in her life when this was new, when she was at least as hot for being choked as Steph was for choking her, but now they’ve got an apartment together–a cat, good lighting–and Maria can’t even muster a shiver. She acts like she’s into it.

It’s a style that will definitely appeal to some people and totally turn off others. It’s deeply introspective, in this post-post-modern, post-hipster, over-analyzing, ironic way. Maria disassociates from any emotion, but analyzes herself and her life continuously. The narrative is in third person, but most of it takes place in Maria’s thoughts, as she tries to figure out what she wants from her life and her relationship. She’s stalled, feeling like she’s an expert on being trans now, but not being able to stop thinking about it for twenty minutes. She feels stuck in her job and relationship, but doesn’t know what else to do.

I feel like this will appeal the most to queers in their 20s, or at least, it did to me. I couldn’t help completely relating to Maria’s thought processes:

It’s frustrating but you can’t just be like, Okay brain, think. Because your brain is like, I am thinking! I am thinking at you, and then you’re like, Jesus, brain, relax. I just mean we need to think about this conversation. . . . She’s like, are you listening, brain? This is way too meta, her brain says.

as well as relating to her self-conscious search for authenticity while acknowledging that it is an impossible and self-indulgent quest, and generally trying to establish a sense of identity while also dealing with internalized queer and feminist critiques of any label, idea, or emotion you may have. (Though I am cisgender and therefore can’t pretend to personally understand many of the things that Maria grapples with.) I know that other people may read it and completely roll their eyes at all of this, however, so if you don’t like the writing style and internal monologue by the first three pages, you probably won’t enjoy the book.

Because this is more of an internal struggle, there isn’t much of a plot happening in Nevada. Maria faces a kind of crisis that forces her to face her own apathy in her life, and she grapples with this. Still, although I knew that not much was going to happen in the book, I still was a little disappointed by the ending. There really isn’t any kind of resolution.

A little more than halfway through the novel, you are introduced to another character, James, who carries a lot of the focus from that point onward, though most of the narrative is focused on both Maria and James interacting. The reason I had liked the book so much up to that point is that I really liked Maria, as flawed and navel-gazing as she was. I wasn’t very interested in James–or, more specifically, I didn’t want to move away from Maria. I hadn’t expected another main character to be introduced so late, and I felt cheated out of more of Maria, even though she is present in most of James’s section as well. I often feel this way about a change in point of view halfway through a story, however. I’m okay with alternating if I know it’s going to happen, but if it happens late in the book, I feel like I just got plunged into a different book before I was finished with the last one.

Still, although I wasn’t entirely satisfied with the ending, I did really like the style of Nevada as well as the characters, especially Maria and Steph (her girlfriend. We get one chapter from her perspective, and I kind of wish we got more.). If the style appeals to you, definitely pick up Nevada, just don’t expect a tidy ending, and do expect a shift in point of view. (As an aside, this book makes me even more hungry for more trans novels, especially trans lesbian ones. I’m glad that Topside Press is making trans narratives a priority, and Nevada definitely sets the bar high.)