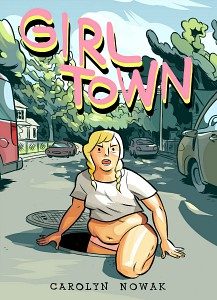 What a weird and wonderful book. This a collection of comic short stories, which differ in characters and style, but have a similar vibe of women’s complicated relationships with each other, and a general sense of unease and yearning. With beginning lines like “I have lived with Ashley and Jolene since we all got kicked out of astronaut school for being too good-looking to be sent to space,” Girl Town wastes no time in introducing you to a world that’s one step out of sync with our own, while still seeming eerily familiar.

The first story follows two neighboring houses of women who are sparring with each. One house has a bacchanalia where they ritually burn the main character’s sock dog, while she looks on, enthralled. It includes the line “Her nipples rattled against the windowsill with an odious rhythm.” Have mentioned how unapologetically strange this book is?

My favourite story is the second: “Radishes.” It follows two girls at an outdoor market. They try on clothes and explore the stalls, but while Kelly prances around the stalls, delighting in spinning around in dresses and cuddling with a tiger, Beth hangs back slightly, perpetually embarrassed. She makes fun of herself for her armpit fat, her chin, and her clumsiness. The two of them stumble on a stall with fruit and vegetables with magical properties. When Kelly accidentally duplicates herself, she wants to take her doppelganger home to mess with her parents. When Beth follows suit, she accepts a hug from her other self and begins to sob, apologizing to her.

“Diana’s Electric Tongue” follows Diana, burnt from a breakup, who finds comfort in a robot boyfriend. “The Big Burning House” is a portion of a podcast about a movie no one has seen since it was aired a few times in the 90s. The hosts speculate excitedly, as they prepare to watch a recently-found copy of the tape. “Please Sleep Over” follows two women (a couple) house sitting at one’s parents’ house. We see glimpses of their stay, but the scene that sticks out to me is them lying together in bed as one says “My parents are good. They’re really good parents. They will always support my choices.” [Panel of silence] “I just wish they didn’t think I was so stupid,” she continues, beginning to cry. Her girlfriend replies with anger, “Shut up. Parents can go to hell. My parents are ‘good’ too. They can go to hell. No one knows what you’re capable of.”

Girl Town is a surreal and affecting read. I felt off-kilter while reading it, with the odd worlds and only brief glimpses into these lives, but the emotions rang true. I read this book because my coworker put it in my hands and said “I just read this and I think you’re really like it.” Not only am I glad to have had it put in my hands, I’m also flattered to be associated with a queer weirdo feelings comic like this one.

One Reply to “Danika reviews Girl Town by Carolyn Nowak”