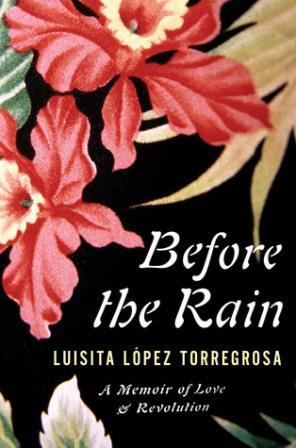 Before the Rain is a beautifully-written memoir that is just what the subtitle promises: about love and revolution. It focuses equally on Torregrosa’s experiences as a newspaper editor and reporter overseas in the 80s, as well as her almost a decade long love affair with a woman named Elizabeth. From the beginning, their relationship comes across as passionate and compelling, but with a note of inevitable tragedy. At times it reminded me of a lesbian pulp in the dramatics and emotion, though it was completely believable. I was also reminded of Jeanne Cordova’s memoir When We Were Outlaws. Both balance an intense and often destructive relationship with high-stakes politics. Cordova’s activism takes place in the US, however, while Torregrosa covers political climates in several countries, mostly the Philippines. (Both are also memoirs written by Latina women, coincidentally.)

Place definitely takes a central role in this book. Torregrosa and Elizabeth travel a lot as foreign reporters, and each place has a huge impact on their relationship. They spend most of their time in Manila in the Philippines. Torregrosa has a skill with establishing mood and setting with small details, and Manila is established as a significant character in the story. This, plus the segment of the book that takes place during monsoon season, reminded me of Miss Timmins’ School for Girls (despite that being a novel). Elizabeth and Torregrosa feel stifled in big cities, feeling much more free and real where the poverty and revolution of Manila was at their front doorstep. In some ways I felt as if they were romanticizing the poverty and upheaval described, however, because Torregrosa and Elizabeth both have lives that partly consist of hanging out by the pool and going to cocktail parties. Manila may have seemed more real to them, but they were also sheltered from the negative aspects, even when they were reporting on it. But there’s a romance to travel in general in the book, as well as in writing.

As a warning, this isn’t a narrative that really feels like there have been major changes from the beginning to the end. It’s not so much a linear “plot”-driven memoir, but more like a long meditation on a relationship. It’s like Before the Rain starts with the question that most break-ups come to, “What went wrong?” but wrote out the entire story, not just a rough sketch. In the beginning, I found Torregrosa much more sympathetic in their relationship. She seemed passionate, though sometimes explosive, versus Elizabeth’s coldness. Elizabeth came across as secretive, moody, and distant. As the story progressed, however, Torregrosa’s passion seemed to manifest more into rages and moods, and I began to find myself sympathizing more with Elizabeth.

From the beginning, their relationship seems fraught, and there never seems to be a way that it could end well. By the end (spoilers?), though the relationship ends in the mid-90s and this book was published in 2012, the author doesn’t seem to have distanced herself from it. She describes still imagining Elizabeth there with her, and I got the general sense of only a short period of time passing, maybe a year, not more than a decade. (But she does describe Elizabeth not fully leaving her life, so I suppose that explains it.)

The strength of this book is in the lyrical writing, and its ability to establish place and mood in a nuanced, compelling way. If you are okay with a memoir that is more of a contemplation of a passionate, deeply flawed relationship than it is a progression from point a to point b, I highly recommend this one.