AfterEllen posted 2012: The Year in Lesbian/Bi Books back in December, but I missed it until now!

Women and Words posted Hot off the Press/Coming Attractions! (New lesbian fiction!) and Mark Your Calendars!

“Reaching into the QUILTBAG: The Evolving World of Queer Speculative Fiction” was posted at Apex Publications.

“List of yuri manga that isn’t about schoolgirls” was posted by mizuno_youko, with links to scanlations.

“Sleeps With Monsters: Lesbian SFF Romance” was posted at Tor.com.

“Out of the Closet & Onto the Page” was posted at Huffington Post. 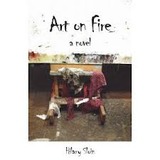 Marbles: Mania, Depression, Michelangelo, + Me by Ellen Forney was reviewed at Lindy Reads and Reviews.

Something in the Wine by Jae was reviewed at C-Spot Reviews.

The Retribution and The Vanishing Point by Val McDermid was reviewed at Lambda Literary.

Art on Fire by Hilary Sloin was reviewed at Out In Print Reviews.

Licking the Spoon: A Memoir of Food, Family and Identity by Candace Walsh was reviewed at Lambda Literary.