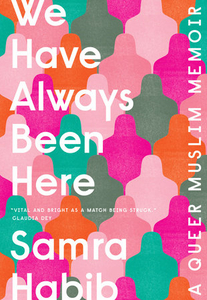 Samra Habib is many things: photographer, journalist, activist, writer, queer woman, Muslim, refugee, and now – with the publication of her memoir – the author of a book. The saying may be ‘Jack of all trades, master of none’, but I think she has done a pretty masterful job here!

I was already familiar with Habib (as you may also be) from her existing body of work. She runs ‘Just Me and Allah: A Queer Muslim Project’ on Tumblr, where she shares the photo portraits and stories of other queer Muslims, and writes for various media outlets such as the New York Times, Guardian, and Vice. She has a strong voice and is always interesting, thought-provoking, and creative with it – so I was naturally excited to read her memoir and learn more about what experiences have shaped her perspective.

We Have Always Been Here: A Queer Muslim Memoir follows Habib’s life, starting with a childhood in Pakistan where her family faced persecution as Ahmadiyya Muslims, followed by immigration to Canada, an unwanted arranged marriage at the age of sixteen, and then finding both her identity as a queer woman and her calling as a documenter of queer Muslim experiences.

As I already said, one of Habib’s writing strengths is her voice. I always enjoy reading her articles, so I was curious to see how much a full-length book would differ from her journalism. The answer is “not much”!

She continues to write with a conversational, confessional style. Reading the memoir is like reading a really long feature article (think the Guardian’s ‘long reads’). Luckily, this is a good thing: it’s what Habib is good at. I was engaged the whole way through, enjoying both the personal aspects and the more factual bits focusing on history and culture.

That said, I did feel like there could have been a little more of the personal, as sometimes the narrative felt like it had gaps. For example, Habib’s siblings fade in and out and barely feature as characters, which feels strange in a work that talks so much about family life. But this is a memoir rather than an autobiography, so it could just be a quirk of the genre.

For me, the memoir gets to be most interesting when Habib starts to talk about her photo project. It’s compelling to hear about how it got started. Habib explains that she wanted to see Muslims represented in queer spaces, and in an accessible way that doesn’t block people with a language barrier or academic jargon.

I was also fascinated to hear more about how people like Habib and her subjects reconcile faith with their queer identities. I have read a fair deal about LGBT followers of Christianity and Judaism, but I haven’t come across much about Islam. One of the stand-out sections is Habib’s description of attending prayers at Unity Mosque, an LGBT-friendly mosque run by a gay imam. After spending so much of the memoir seeking belonging, it’s delightful to read about Habib finally feeling part of a community.

The title We Have Always Been Here is actually taken from a quote from one of Habib’s subjects, Zainab. It’s a powerful statement about asserting the right to a shared community, history, and voice for queer Muslims. But I don’t know if it’s the right title for this memoir. Going into it, I was expecting more on the history of queer Muslims, whereas the memoir is focused entirely on contemporary experience. I don’t dislike this focus, but it wasn’t what I was expecting from the title.

Still, I see why Habib wanted to use a quote taken from her photo project. This memoir is a natural extension of her existing body of work: yet another way in which she asserts that queer Muslims exist – indeed, have always existed – and deserve to have their stories heard.