I had the privilege to see Staceyann Chin do a live reading at Miami Book Fair a few years ago, which is where and why I picked up this collection. Her performance was electric and captivating, and that strong voice translates well on the page.

Every piece is propulsive and rhythmic, feeling like there’s a drum beat underlying each one. A lack of punctuation in most pieces creates this movement, forcing you to read line after line after line, all in one breath until you reach the end of the poem, like in “Catalogue the Insanity,” written from start to finish without any punctuation marks, not even a period at the end.

But there are also quieter moments that slow down the rhythm, giving you a chance to breathe. Chin creates this with the use of white space around lines and stanzas, such as in the poem, Love:

The speaker’s language packs a punch, bringing forth fire and anger. Chin is unapologetic in her feminist rage and it energizes the reader, making you feel like burning it all down. Covering themes of sex and sexuality, rape and assault, it can be overwhelming at times. But that’s the point. Her purpose is to be loud and in your face and make it hard for you to look away.

She combines poetic imagery and metaphors with straightforward phrases that don’t mince words to create both art and rant, like in the poem Speech Delivered in Chicago at 2006 Gay Games:

“…even in friendly conversation
I have to rein in the bell hooks-ian urge
to kill motherfuckers who say stupid shit to me
all day, bitter branches of things I cannot say out loud
sprout deviant from my neck…”

Overall, this is a loud and empowering collection of poetry that is accessible to readers who often feel like they don’t understand poetry. It’s an outstanding example of how much we need more diversity and representation to give space for voices that often get drowned out by the mainstream and literary canon. 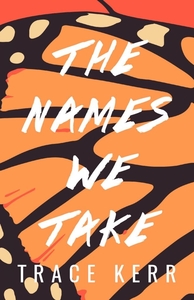 The Names We Take is a young adult dystopian novel set in Spokane, Washington after an epidemic called the One Mile Cough wipes out a huge chunk of the population. Pip, the protagonist, is an intersex trans girl just trying to survive.

But a group of bounty hunters has a different idea as they seek women and children to gather for a supposed safe haven called Thistle Hill Orchard. When Pip takes charge of a girl named Iris, she must keep the child safe and do what’s best for their newfound family.

The novel moves at a good pace as the action keeps its momentum going forward while the moments of peace allow the characters and reader to breathe. Kerr is adept at unraveling details about the characters throughout the narrative without falling into info dump traps. While the character development shines, the plot development fell a bit by the wayside.

The premise is that a plague hit Spokane’s population, but the One Mile Cough disease isn’t given much page time other than to say that’s how they got into this post-apocalypse world. Its origins or spread are never detailed, and the reader doesn’t know for sure how far it hit. It’s assumed the whole United States at least, as the citizens of Spokane have been left to fend for themselves. But the narration never confirms that guess.

As Pip goes through the new world after civilization has crumbled, she faces a great deal of the same prejudice and bigotry as she did before the world ended. She gets misgendered constantly and experiences violence at the hands of men. It’s a brutal pill to swallow as she continues to assert her existence as her true self, fighting narrow-minded bigots and righteous zealots who feel they know best for her.

But Pip finds reprieve in her relationships. Whistler, a survivor of One Mile Cough with PTSD, is her protector. Iris becomes the little sister she must guide and protect. Fly is the beautiful girl she falls for in the middle of the chaos around her. The dynamics between the protagonist and supporting cast are what make this book such a fascinating read. It’s the story of the family forged when people take a stand and fight for who they are.

The most interesting development in Pip’s character is her demeanor toward Iris. It’s clear that Pip doesn’t lack compassion, but she does lack patience. Running around with a twelve-year-old girl who is prone to pouting and eye-rolling, even in the apocalypse, teaches her a great deal of patience and love.

Another delightful aspect of the novel is its inclusion of periods. Post-apocalypse stories are notorious for staying away from the subject of menstruation, but it’s a problem that should be addressed, because it’s an unavoidable fact of life for people who menstruate. Kerr doesn’t shy away from the topic and details how Pip gathers pads and teaches Iris what to do when the young girl gets her first period.

The language around Pip’s gender and sexual orientation is careful and precise. It’s explained that she was born intersex and that her parents chose male for her at birth, but when she hits puberty and gets her first period, that’s when she finds out she was born intersex. As she grows, she becomes sure she wants to be a girl and takes steps to make her body appear as her true identity.

Throughout the novel, the audience sees her struggling when she’s called a boy or questioned about her gender. She clearly still holds insecurity and body dysmorphia over her masculine appearance in many ways. But Iris accepts Pip as a girl, even if the others in Thistle Hill don’t. Pip also reveals she is bisexual when she starts developing a crush on Fly. Her feelings fill her with fear, but Fly assures her it’s okay, as does another friend at the sanctuary.

The Names We Take is set to be published by Ooligan Press in May 2020 but is available for pre-order now from the author. Be on the lookout for it!