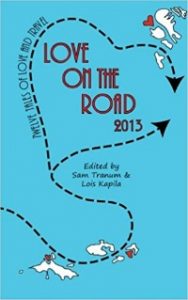 Love on The Road 2013 edited by Sam Tranum and Lois Kapila is an anthology of twelve stories depicting love and travel in diverse locations like India, Alaska, and New York. I really wanted to enjoy this collection because it seemed like a promising and fun concept. However, I just couldn’t get into several of the stories at all. I loved Doreen E. Massey’s “The Upside Down Trees” and Kimberly Cawthon’s “Cindy in Manhattan” which are really well-written with fascinating and layered characters. However, a few of the other pieces suffer from dull or stereotypical characters and pointlessly meandering plots. There are a few LGBTQ characters featured in the stories but they are side characters. However, there are two stories where women’s romantic relationships with women are featured.

Mohita Nagpal’s “The Girl with the Egg-Shaped Face” is well-written and interesting. The author labels her piece as “seventy percent non-fiction.” The female protagonist is instantly attracted to the titular girl with the egg-shaped face, Shilpi, when they meet on a bus while travelling to the Jaipur Literature Festival. The main character is well-crafted and her pining for the object of her affection is relatable. The brief interactions between Shilpi and the narrator are poignant and painfully realistic. However, the narrator’s crush soon takes an invasive turn. She goes from entertaining harmless fantasies in her head to Facebook stalking and she even obtains personal information about Shilpi and follows her to another city. Her intrusive actions are disturbing but you cannot help but feel empathy for the narrator who has been unlucky in love and is entranced by her fantasies. Although the melancholy ending may disappoint some readers, I believe that it is a satisfying and organic conclusion.

Naima Lynch’s fictional work “All That You Forgot to See” takes readers from New York City to Egypt with Althea, a lonely middle-aged woman who is sleepwalking her way through life. Although she displays racist and xenophobic behaviour, the story’s gently optimistic ending indicates that there may be some hope for Althea. However, her repression and her inability to connect with people as well as her sad and stagnant life are achingly realistic. Lynch makes a seemingly unrelatable character all too human. Althea’s best friend, Lorraine, is the heart of this story and the nuances of their relationship are poignant and well-developed. Lynch does not assign labels to the women and, without giving too much away, the characters and the nature of their relationship are surprising but still seem true to life.

If you’re looking for a lot of LGBTQ characters and stories, this isn’t the book for you. However, if you like travel anthologies, it is a decent one time read with several well-crafted gems sprinkled throughout. I would definitely reread Mohita Nagpal’s “The Girl with the Egg-Shaped Face” and Naima Lynch’s “All That You Forgot to See.”