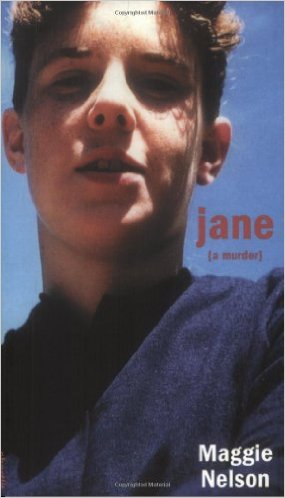 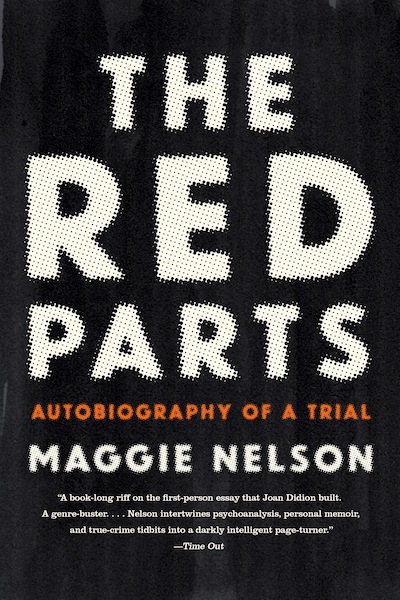 Nelson is a wonderful writer, whose memoir/queer theory explosion The Argonauts was probably the best book I read last year. It got me interested in checking out some of her earlier work, The Red Parts and Jane, which are very different from The Argonauts, and from each other, but both exceptional books.

I wasn’t sure about writing about these books here, because Nelson doesn’t address her sexuality at all, but they’re both so good. We’re more than a single aspect of our identity. Here Nelson is writing as a daughter, a niece, a young woman who sees herself in her aunt’s fate.

I read The Red Parts first, and it opened up the world of Jane to me. Though it was written later, I think I’d recommend this reading order. Both books deal with the story of Nelson’s aunt, Jane, who had been murdered thirty-five years before. The crime was never solved. Nelson grew up with this story as a part of her family history. It shaped her childhood in ways that she didn’t really understand until she got older. Jane is the book of poetry she wrote trying to understand her aunt and the murder. Just before Jane was going to be published a detective called Nelson’s family and told them that they had found the murderer. The Red Parts is the memoir she wrote about this news, the ensuing trial, and how Nelson’s perspective on the case shifted with new information.

The Red Parts is a really compelling mix of true crime/detective story, family history, and writer’s journal. Nelson’s relationship to Jane’s death is informed by the fact that she just spent years writing a book of poetry about it. She’s done the research, she knows the facts, she’s visited the sites. And now all of this information is being presented in the new context of a trial. From her family it is just Nelson and her mother who are able to attend every day of the trial. We also see how Nelson went about writing Jane. Having her describe the process that created these poems made me really want to read them.

That Jane is an artifact within The Red Parts informed how I approached it. It gave a backstory for how these words wound up on the page. In the poems she tracks down her aunt’s old boyfriend — we see more of how this happened in The Red Parts. It gives more history and context for everything that happened. While I’m sure the poems would stand on their own, having the memoir as well enriches the experience.

What really struck me reading Jane was the way it commented on the vulnerability of being a young woman. Jane was coming of age during the late sixties. She was rebelling from her parents, and starting to create her own life, which was suddenly halted because women, especially young women are vulnerable to male violence. While Jane was not raped, at the time her death was linked to a serial killer who did really horrific things to his victims. Nelson’s writing about violence against women, including sexual violence, is so raw. This vulnerability is something she shares with her aunt, something that has not changed or gone away. Both books riff off an Edgar Allen Poe quote wondering what the most poetic topic in the world is, and deciding it must be the death of a beautiful woman. That is almost the subject of Nelson’s poetry, but she’s equally preoccupied with asking what is it about our world that makes this a correct answer.

Both books are the sort of writing that sweeps you up and holds on. I didn’t mean to read The Red Parts in one night. I was going to read a little bit before bed, but not much, because I was worried about the true crime element giving me bad dreams. But then it was so good, and so compelling, and I couldn’t put it down. I spent a wonderful raining afternoon with Jane. It’s such a narratively gripping collection of poems. Even though I knew the story already from The Red Parts, I wanted to follow Nelson’s train of thought, and see where her poetic journey into her aunt’s murder lead. They’re beautiful, tragic books.