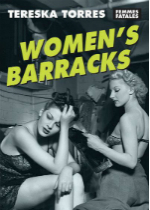 Women’s Barracks is a novel by Tereska Torrès. It depicts the lives of a few women and girls who worked for the Free French Forces that existed in London during World War 2. The novel is a sort of collection of snapshots of their lives. It is based upon the journals the author wrote during her time in the Free French Froces. There is no plot per se but only the portraits of those persons trying to live through the war.

Our point of entry in the story is the voice of the narrator who was one of those women, who experienced everything with the rest of the protagonists in the book. However she never really takes any part in any of the actions. She is a constant presence, someone in whom everybody confesses their story and she merely relates them to us, always staying in the background herself, never involved in anything. She is just a witness relating what she saw and heard. It can be easily understood though. The novel was apparently the first pulp novel to candidly address lesbian relationships and the author married at the time might have not want to be associated with the lives of her characters. She even refused its publication in France (where she lived), but later on published her journals there under another title. I haven’t read or even had a look at her journals so I don’t know how much of the novel is based from her observations and reality compared to and how much she created for the novel.

To get back to the characters… they are a mix of women and girls, all of them out of their country with no home and no family. Dynamics soon takes place between them, the older women trying to protect the younger ones, to educate them. It is an extraordinary time – in the sense of out of the ordinary – and as time goes by and the war doesn’t end there is a loss of hope for everyone. War is becoming the everyday life, chaos normal, and the island that is the Free French Forces constitutes the home of those women and girls. They seek confort among each other, security and reassurance in a world that is becoming familiar, filled with people they understand and that understand them.

The author mentions a few “real” lesbians but they are merely in the background of the novel, appearing here and there but never really taking the main place in the novel. However the author describes to us the relationships of other women who sleeps with other women but are not normally lesbians. I actually like how she describe those relationships. For Claude and Ursula for example it is a simple relationship of love/control/fascination. Claude being much older than Ursula she is sort of her teacher that Ursula idolized. As for Claude and Mickey it is pure amusement. Mickey is depicted as a lover, as a woman always having fun and making the most of life. She simply loves anyone regardless of their gender.

I really enjoyed the novel but I have to admit that at first I expected it to be more scandalous. But then, I remember that I am a reader in the 2010’s and that I definitely don’t live in the same cultural environment and experience as people in the 1950’s.

But still, I didn’t find the novel really shocking and to me it is not about the lesbian relationships that happened during World War 2 between the women of the story. It is a story about people who were all lost in some way, seeking comfort and warmth among each other, clinging to what they knew, to what felt familiar and safe. It is also a novel about life trying to keep on as normal in extraordinary circumstances, a world in which games of love still happened. I especially like this quote “There seemed to be only frenzied sexual adventures, promiscuity, or these sad, strange inversions. I wondered unhappily whether love could exist in out upset wartime world, the plain, faithful love between one woman and one man.” because I feel it sums up the novel quite well. In spite of everything all those women are simply looking for love but don’t know how to find it in a world in which your lover could be taken away from you and die at any moment.