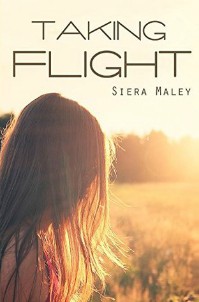 [This review contains spoilers and a brief mention in paragraph four of homophobic abuse and alcoholism in the novel.]

Taking Flight is a young adult coming-of-age novel by Siera Maley where lesbian LA-born and bred high school senior Lauren gets in trouble for skipping school and is sent to live with a middle-aged Christian youth worker David and his family in rural Georgia. When she arrives Lauren discovers she’ll be sharing a bedroom with David’s daughter Cameron, a very beautiful church-going cheerleader, and you can probably guess how Lauren feels about that.

There are a lot of things to like about Taking Flight, not least of all the tender love story at its core. The lead character has been sure of her sexuality and comfortable with it from a young age which is a pleasant contrast to many formulaic WLW YA books where the protagonist has a sudden lightbulb moment after meeting a bold new person who pushes them out of their comfort zone. Taking Flight doesn’t particularly play in to tired stereotypes about the southern USA either. And Maley doesn’t waste time doing too much boring set-up before throwing Lauren into the far more interesting fish-out-of-water premise of the novel, instead filling in gaps later as need be.

There are a lot of plot holes though, some big and some small, and Lauren as a character isn’t particularly three-dimensional, instead seeming to serve as a bland narrator that the reader can substitute themselves with. For a lot of readers this might be ideal, it just would’ve been nice for Lauren to have more hobbies, interests, quirks and motivations of her own to go with those of the other major characters, even if she had found those once she arrived in Georgia. Also Lauren’s entire family history doesn’t quite make sense; both her parents’ long Hollywood marriage after meeting as teenagers and the press’ complete disinterest in the child of an A-list actress are implausible in the twenty-first century.

To its credit the novel realistically depicts people’s varied responses to different characters coming out throughout the story, with many characters being accepting if not always enamoured of homosexuality, while one character’s aggressive reaction is one of the only potentially distressing scenes in the book. Additionally the complex feelings Lauren has towards her father due to his functional alcoholism are also handled sensitively. Ultimately the  central love story where two very different people from contrasting worlds give each other the space to express themselves and offer open-hearted support for each other’s innermost feelings and dreams is undoubtedly the most beautifully realised part of the novel and certainly what makes it worth reading.

Taking Flight gives the impression that the author wanted to offer readers a teenage gay love story that unfolded slowly, and was built on kindness and respect, and had an uplifting (excuse the pun) ending. While there are some weak spots, for the most part Maley succeeds with soaring colours (couldn’t help myself).