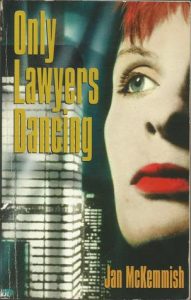 I’ve had to create a new shelf for this one called Lesbian Crime Fiction. There is a lot of crime in this book, and a couple of lesbians, but nobody actually solves a mystery or a puzzle. At least, I don’t think they do. The fact is that Only Lawyers Dancing is so literary that it’s often difficult to follow the thread of the several stories that are going on simultaneously. The author uses first person present point of view not only for Frances Smith, the lesbian protagonist, but also for her co-protagonist, Anne Stevens, a straight woman. And for Anne’s boyfriend Harry, who may or may not be a mobster. But she also goes into third person at times, but told as if one of the other characters is relating it. And stream of consciousness abounds.

Anne and Frances are very old friends from two very different backgrounds. Anne’s father was a policeman while Frances’ was a crime boss. One of he recurring narratives in this book is a crime that took place over two decades earlier—one that eventually led to Anne’s father having a nervous breakdown. But despite the fact that these murders are referred to again and again, they seem to have no relation to the rest of the book, which is mostly concerned with a well-known hit man named Max hiring Anne to make him look good in court. The rest of the book deals with various criminals connected to Max and their relationships to both Anne and Frances.

But McKemmish did not write Only Lawyers Dancing for the plot or the story. She did it because she loved writing and the opportunities it often offers to bend genres. She wrote it because she loved words and the many possibilities they give to communicate ideas in different ways. Think of a hybrid between the prefaces to the chapters in Steinbeck’s The Grapes of Wrath, Michelangelo Antonioni’s classic movie Blow-Up, and Clare Sudbury’s odd crime novel The Dying of Delight. But don’t really expect things to make sense. The author knows exactly what she is doing and isn’t shy about letting us know it. “The trouble is you keep expecting it to make sense, like a serial moving tortuously slow through the labyrinth of side plots and byways toward an order, a clarity, a closed book.”

In some places the writing is pretentious, in others it is engaging and downright brilliant. Like, “ . . .the new week looms like a mountain in the mist when you’re on a cheap-fare-to-Europe aeorplane and hoping, hoping hoping that the radar works.” But there is murder, embezzlement, theft, and even a kidnapping on the way to denouement. It’s not certain what satisfaction the characters get from all this, but we can only hope they all live happily ever after. I give it 4 stars.