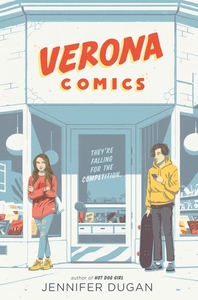 Because this is the Lesbrary, I’ll start by saying that this is a f/m romance with a bi+ main character (and love interest).

I picked this up firstly because I really enjoyed Dugan’s previous queer YA title, Hot Dog Girl. I was also interested in the premise: two teenagers whose parents own competing comic book shops fall for each other. As the title suggests, these are ~star-crossed lovers~, but it isn’t a Romeo & Juliet retelling beyond that (at least, not as far as I could tell). It ended up being a thought-provoking read for me, one I’m still turning over in my head days after finishing it. It definitely wasn’t what I expected.

Jubilee is a cellist prodigy whose life is consumed by her music, and is currently frantically rehearsing to get a spot (and scholarship) for the summer program at Carnegie. Her music teacher and friends both demand that she takes a break and lives a little, so when she attends a comic convention, she decides to pursue a “con crush” with a guy in a Batman mask. Ridley is there to help out at his father’s booth–except that his dad usually wants nothing to do with him. Ridley is suffering from serious anxiety and depression, and is caught completely off guard when Jubillee flirts with him.

Their romance continues in text form, until Ridley tells his dad he’ll scope out the competition and report back to him in order to not get sent back to his mother’s house–and in order to live in the same town as Jubilee, who is oblivious that Ridley is also the mysterious Batman cosplayer and that he’s supposed to be spying on her for his frankly villainous father.

So that’s the premise! But what struck me about this story isn’t the machinations of the plot, but the details. Ridley is a character that I have not seen in a novel before. Top Ten by Katie Cotugno (another bi f/m romance) has a socially anxious main character, but Ridley’s thought spirals are disturbing, especially if you have any anxiety or depression yourself. He catastrophizes. He picks apart and criticizes every one of his own words and actions. It’s unnerving to be inside of his head. He also has suicide ideations, including a previous attempt. His family is abusive, from an emotionally absent mother to an openly insulting and even frightening father. He makes bad choices, but they are understandable because of how much we see into his reality. At the same time, I would warn anyone with anxiety or depression to approach this cautiously, especially because he sometimes feels like a burden to his loved ones because of his mental health struggles.

The beginning of Jubilee and Ridley’s relationship was cute: I could see how they both hit it off, with their similar senses of humour and love of fandom. (Ridley is a huge fan of Jubilee’s stepmother’s comics.) [Minor spoiler:] I was also surprised at how early on in the story Ridley came clean about his deception. I’m used to stories like this dragging on the deception, and I much prefer that Jubilee and Ridley get on the same page at a reasonable point. [end spoilers] Unfortunately, even after that, it isn’t exactly a healthy relationship. They are both good people, and I see why they’re attracted to each other, but it doesn’t work. Jubilee begins to spend much of her time trying to take care of Ridley, neglecting her own life. Ridley is dependent on her, and also feels guilty about keeping their relationship (and his family) a secret from her parents. They love each other, but it’s not making either of them very happy.

Of course, check the title again: did we really expect a riff on Romeo and Juliet to be a happy story? It’s the ending that left me thinking the most, however. [Major spoilers, highlight to read:] They don’t end up dead, but this R&J-inspired couple do have a suitable tragic and dramatic ending to their relationship. As shocking as it first felt to have Ridley steal his sister’s car (without a license) and try to drive them both out of town, it did follow from the rest of the story. Ridley is completely panicked, and feels like there’s no way out. He can’t give up Jubilee, the only good thing in his life. He can’t go back to his mother, and his father kicked him out. He is spiraling. And although Jubilee knows this is a bad idea, she loves Ridley and is afraid for him. She worries that he’ll try to kill himself if she leaves him alone during this crisis. She feels like if she can only say the right thing, go along with it just for now, she can buy enough time to save him. I understand this impulse, and I’ve been in relationships where I felt responsible for my partner’s safety, so it felt discomfiting and realistic.

The car crash also felt surprising, but makes sense. He doesn’t know how to drive! And maybe this is what needed to happen to make them both understand how serious the problem was. Surprisingly, the happy ending for this Romeo and Juliet is not being together. It’s in getting therapy. Ridley realizes that he needs help, and reaches out to his sister, who is eager to do anything that will keep him safe. He ends up going into inpatient care in a centre specializing in anxiety and depression in teens. Surprisingly, Jubilee also begins attending a support group for codependency. [End spoilers] It’s interesting to think about this in conversation with Romeo and Juliet retellings, which usually glorify an all-consuming, doomed love. Why do we keep coming back to these stories? What do we want from them? And what do they look like in the present day?

And, of course, to booked this Lesbrary review, I have to talk about the queer content. On tumblr and twitter, people often are looking for m/f romances where both characters are bi+. Jubilee doesn’t identify with a label, but she is attracted to multiple genders. She feels like an impostor because she’s only dated boys, though, so she doesn’t feel like she can say she isn’t straight. Ridley’s last relationship was an “almost boyfriend” who blackmailed him, leading to his non-fatal suicide attempt. Jubilee and Ridley aren’t the only queer characters, though. Jubilee’s best friend, Jayla, is a Black lesbian, and there is a little bit of discussion of how she is treated by the comics fandom because she’s Black, including when cosplaying white characters. Jubilee also has two moms, and her stepmom is Latinx.

Verona Comics was definitely an interesting and unexpected read. It’s one that left me thinking, and I think acts as a good counterpoint to all-consuming, unhealthy teen romances that are often glorified, especially in YA/teen movies. It isn’t one that I would recommend freely, though, because of the intense mental health issues, including a suicidal main character. If you’re able to safely put yourself in that head space, though, this is a compelling read that will definitely stick with me.